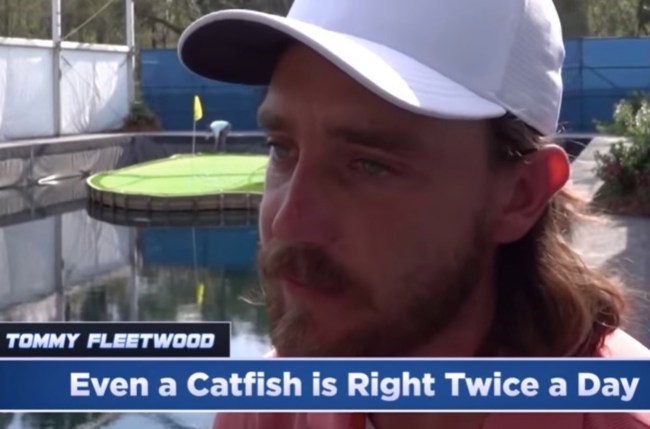 Working from home these days I get to watch A LOT of golf on TV. The state of daytime television in America is dismal but when Thursday rolls around and the PGA Tour is on TV, things aren’t so bad.

Coverage of the tournaments usually starts around 2 or 3pm on Thursday and Friday but the live tournament coverage is often preceded by interviews and press conferences from players, and we get more interviews after the day’s play has wrapped up. Occasionally, you catch a player saying some completely off-the-wall bullshit but there’s no reason to second guess it as anything other than a slip of the tongue, until now.

Jimmy Fallon‘s latest gag is seeding a series of words or phrases to athletes and have them try to casually drop these phrases into interviews. He pulled this off on NBA All-Star Weekend with Steph Curry dropping some off-the-wall bullshit, and he’s just done it again by enlisting the help of PGA pros like Adam Scott, Tommy Fleetwood, Jason Day, Brooks Koepka, and more.

I have to tip my cap to Tommy Fleetwood for being able to drop ‘even a catfish is right twice a day’ without laughing. Jason Day started to crack up before referencing ‘The 1992 Grammy Awards’ and had to compose himself.

Other players got pretty lucky and were seeded things that normal golfers would say in conversation and it would be weird at all like Brooks Koepka’s ‘swing it and ding it’ and Webb Simpson’s ‘smack it, attack it, swing it like a racket.’

Anyone else really craving all you can eat breadsticks now? No? Just me? Anyone? Bueller? Bueller?