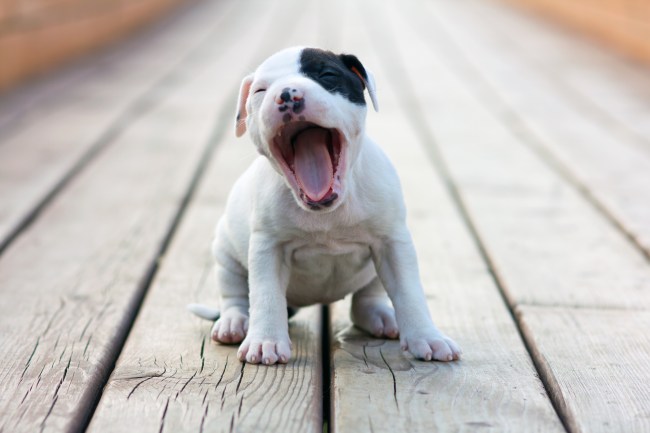 I come across some completely insane fishing tales in my day. I’ve written about fishermen who were stabbed in the heart by billfish and had to be rushed to the hospital. Just yesterday this 16-year-old surfer in Hawaii narrowly avoided a shark attack by tucking his legs onto his board so the shark took a chunk out of his board instead of his leg. Crazy things happen in the water but this story is NUTS.

A man was fishing from the shore in Bodega Bay in Northern California. His 1-year-old Pitbull was in the truck because he was fishing so close to the road and didn’t want his dog in danger of getting too close to a car.

The tip of the rod bent, he started fighting the fish, the line went slack and he realized it’s because the fish was swimming towards him. That’s when he realized it was a 6-foot Sixgill Shark, and here’s when things got insane.

While attempting to pop the hook out the shark’s mouth it bit him in the leg and hit an artery, immediately spraying a ton of blood. He wasn’t able to dislodge the shark and began screaming for nearby fishermen to help him but before that happened his dog was there to save the damn day. Here’s the story from NBC Bay Area:

“Immediately there was blood everywhere, the first bite punctured an artery,” he said. “The pressure was intense.”

As hard has White tried, he couldn’t get the shark to release. He yelled to some fisherman a few hundred yards away for help but before they could get to him someone else did: Darby.
After hearing White yell and struggle, the dog managed to open one of the car doors and race down a short hill to his owner.
Darby launched himself at the shark and bit into the shark’s gills, causing the shark to sink its teeth even deeper into White.

“And I told him, ‘No back off’ and then [Darby] repositioned and grabbed it by the tail,” said White. “He literally ran up the hill with it and pulled it off my leg.”
White tossed the shark back into the water and it swam away.

White doesn’t know how he would have gotten the shark to release were it not for Darby. He says the dog definitely saved his leg from more damage, possibly severing the artery it had already punctured. (via)

Look at this good boy:

Dogs are the best. It’s not even up for debate. If a cat saw its owner being attacked by a 6-foot shark it would probably turn around and piss in his truck instead of attempting to help.

Pitbulls get a totally bad reputation. Just like every other dog breed on the planet, they are perfect angels when they’re treated with love and affection. Furthermore, dogs named Darby are exceptional. I had an Irish Terrier named Darby who was a fantastic dog.

If it wasn’t for Darby the 1-year-old pitbull this man very well might’ve lost his leg as the shark continued to clamp down and rip his flesh to shreds. But this dog saved the day and he deserves all the praise.

The man, James White, told NBC Bay Area “He’s been a part of the family from day one. Just now a little more. If it wasn’t for him I would have been a lot worse.”