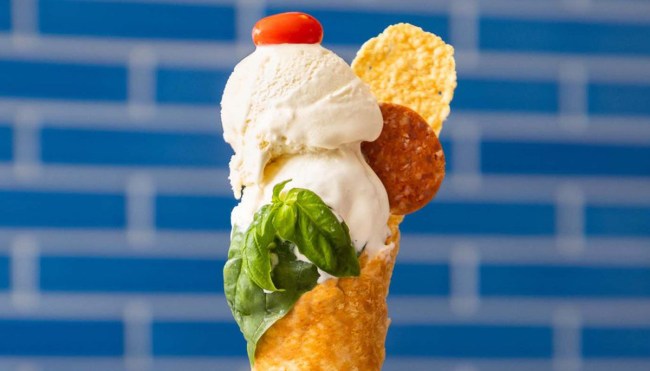 In recent years, the many Brands that pride themselves on drumming up hype with absurd publicity stunts have seemingly realized there aren’t many better ways to do exactly that than whipping up a batch of ice cream that tastes like something ice cream really shouldn’t taste like.

This trend can arguably be traced back to 2018 when ketchup gelato was unleashed upon an unsuspecting world a few months before the twisted minds behind a mayonnaise-flavored ice cream managed to make the internet collectively and reflexively gag.

Kraft opted to hop aboard the condiment-inspired bandwagon the following summer with the release of a mustard dairy concoction, which dropped a week before Oscar Mayer unveiled an ice cream sandwich containing pieces of actual hot dogs.

The former returned with a vengeance in 2021 when it created a mac and cheese flavor in conjunction with Van Leeuwen that was so well-received that it actually got a national rollout earlier this year along with some other equally bizarre flavors including pizza and hot honey.

Now, that first flavor has some competition courtesy of Digiornio, as Delish reports the producer of frozen pies has upped the stakes with its own interpretation that will be getting a limited release in honor of National Ice Cream Day on July 17th.

The pizza-inspired ice cream comes in two different flavors—Strawberry Tomato Basil and Parmesan Cheese—that were whipped up by Cleveland’s Honey Hut. While those may not sound incredibly appealing, I’d be lying if I said I wasn’t intrigued by the cone made with the company’s croissant pizza crust designed to hold the scoops.

Here’s the SCOOP: In honor of #NationalIceCreamDay your favorite Croissant Crust is now an ICE CREAM CONE. Yup. You heard that right ‼🍦

Enter for a chance to win by signing up here now! https://t.co/vt2OmnVwHc

The kit you can use to put a cone together at home will only be given away to 20 people, and if you want to be a member of those lucky few, you can throw your hat into the ring here.