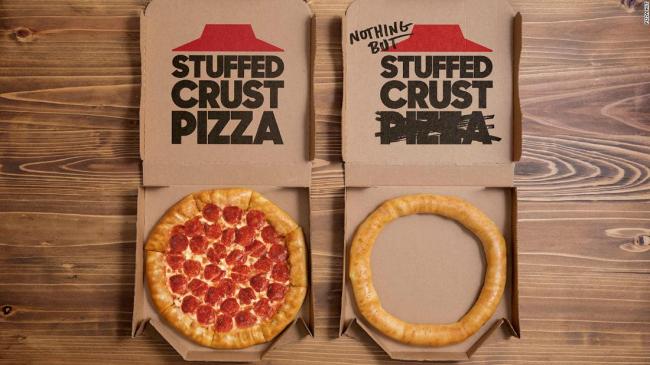 If you’re a child of a certain era, there’s a good chance Pizza Hut gave you some incentive to do some reading at a young age by dangling a free personal pizza in front of your face as part of its iconic BOOK IT! program, which was both a great way to encourage early literacy and an absolutely brilliant marketing strategy.

I’d be very surprised to learn whoever dreamed up the initiative wasn’t hoping to capitalize on kids like myself who did everything in their power to wear down their parents in an attempt to convince them to supplement their complementary pie with another menu item, as I usually spent the ride to the restaurant lobbying for a bonus in the form of the Stuffed Crust Pizza that took the world by storm in the 1990s.

Pizza crust has always been subjected to an absurd amount of disrespect by far too many members of the population who essentially view it as the carb-filled equivalent of an apple core. However, that all changed when the chain decided to upgrade it by packing it with cheese, which was an absolute game-changer.

We suddenly found ourselves living in a world where crust had somehow become the main attraction, as a lot of people did what was previously unthinkable by *gasp* chowing down on the border before making their way to the actual pizza, which had almost become a bit of an afterthought.

Pizza Hut has routinely tinkered with its revolutionary innovation over the years before things sort of spiraled out of control when it debuted an offering surrounded by cheeseburgers, but now, it’s going back to basics to celebrate the 25th anniversary of its initial unveiling with a crust that eschews the whole “pizza” aspect entirely.

Unless you’re lucky enough to live in the vicinity of Los Angeles or the Dallas-Fort Worth area, you’ll have to take a road trip to get your hands on what has been dubbed “Nothing But Stuffed Crust,” which is being given out for free to lucky customers who drop at least $10 on an order at the four locations where it’s being handed out.

Based on all of the slander crust has constantly had to deal with over the years, I’m glad to see it finally get the chance to step into the spotlight.