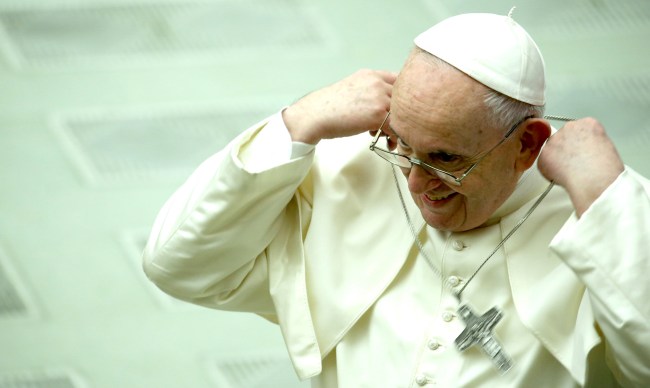 As I mentioned the last time he did it, it’s happened to the best of us. I mean, Pope Francis is 84-years-old so you’ll have to forgive him if he forgets now and then to switch to his burner Instagram account while perusing racy photos of models.

This time the official Pope Instagram account appears to have been busted liking a sexy photo of model Margot Foxx.

“Hey thats me,” Foxx wrote on Monday in a tweet with a screenshot of Pope Francis liking her photo.

The last time this happened, back in November when the official papal Instagram account dropped a like on Brazilian model and Twitch streamer Natalia Garabotto’s photo, the Vatican launched an investigation.

The Vatican press office claimed the pope’s social media accounts are managed by a team of employees and they were looking into who the culprit may have been. (It was totally Pope Francis, right?)

Brb on my way to the Vatican 🙏🏼

Also like last time, several folks on social media were impressed with the pope’s taste in women.

The pope is what brought me here he like em thicc pic.twitter.com/80UTeLwQvI

More Pope’s Gonna Pope News…
• Pope Francis Pissed Off The Vatican By Calling Whiskey ‘The Real Holy Water’ And I’ve Never Felt So Blessed
• Pope Francis Is Auctioning Off His Dope Custom One-Of-A-Kind Lamborghini Huracán
• The Pope Doesn’t Poop In The Woods, He Poops All Over The Alabama Crimson Tide With War Eagle Tweets
• Cool Pope So Dang Chill He’s Letting Vatican Properties Be Used As Brothels For Priests
• The Pope Drops Straight Fire Banger Off His Upcoming Rock Album