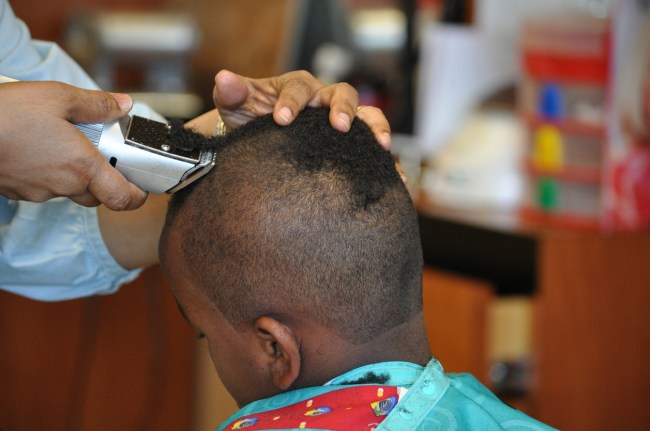 Now for some good news. Instead of disciplining a student who refused to take off his hat, an incredible principal got to the root of the problem.

An eighth-grade student refused to take his hat off while at school in Indiana on February 18. He was sent to the principal’s office, but instead of being written up or detention, the principal sentenced the boy to a professional haircut in his office.

Jason Smith, the principal of Stonybrook Intermediate and Middle School in Warren Township, used his patience and a razor to remedy the situation.

“He was refusing to take his hat off. So, I sat down with him and asked him why, what was going on,” Smith told WRTV out of Indianapolis. “He said he just got his haircut, he didn’t like the way it looked, and he thought his hairline look a little funny.”

Lucky enough for the young man, Smith was ready to fix him up.

“I’ve been cutting hair most of my life. I played college basketball cut my teammates’ hair before games, and I’ve been cutting my son’s hair for 17 years,” Smith explained. “So, I had professional clippers and edgers at home, so I said, ‘If I go home and get my clippers and line you up, will you go back to class?’ He said, ‘Yeah, I will.’”

Sure enough, Smith lined him up, and the youngster returned to question with his fresh fade. The photo of the impromptu haircut in the principal’s office/barbershop was posted on social media. The amazing image immediately went viral and was shared over 26,000 times on Facebook alone.

Smith understood how malicious kids can be at that age, and a busted haircut is prime material for ridicule.

“That age is a time where peer acceptance is huge,” Smith said. “So, a young man, especially an African American young man, the barbershop is a big deal in the community. Looking good and representing and presenting yourself is huge for kids.”

A middle schooler was insecure about his haircut. So his principal fixed it himself instead of disciplining the boy for wearing a hat. https://t.co/3ydEXSKLVW pic.twitter.com/PyxbHlmmHi

“He really was not trying to get out of class,” the principal said of the student. “He just thought that he would be laughed at, so we took the time and did what we could to help him.”

Smith noted that empathy and not punishment is the best way to resolve issues, “We’re not disciplining with a hard fist. You could call and have the parent pick the kid up for defiance, or you can sit and get to the root of the problem and see what can I do to help you? What do you need right now?”