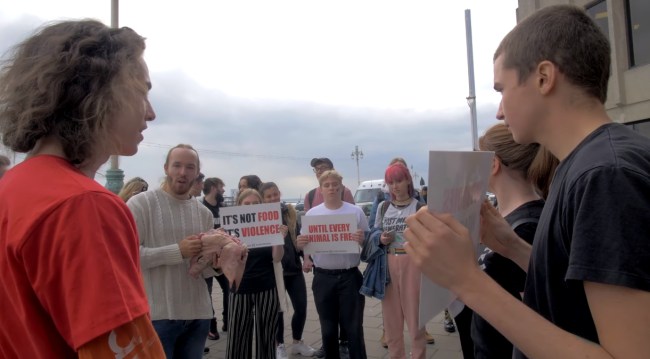 Vegans have a lengthy track record of purposely seeking out things to be “outraged” about and then get upset that something meat-related angers them and that they know what’s best for everyone. However, in this case, it was a carnivore who purposely sought to provoke people who were happily going about their business and eating their tofu “beef jerky.”

YouTube provocateur sv3rige, who is very pro-meat and extremely anti-vegan, went to a vegan festival in the UK to stir up trouble. The YouTuber went to the VegFest 2019 at Brighton Center and wanted to rile up vegans by eating a raw pig head at their annual festival. It went as well as a one-legged man in an ass-kicking contest.

The YouTuber along with two other supporters went to the festival with the intention of telling them the dangers of a vegan diet and attempt to convert non-meat eaters to be carnivores. They thought eating a raw pig’s head in front of everyone want to jump on the meat bandwagon. Have these people ever heard of the saying, “You catch more flies with honey than you do with vinegar?” Forget the pig head, bring a delicious cheeseburger topped with thick cut hickory smoked bacon to try to convert people.

Soon after his agitational exploits, hardcore vegans took exception to the public display of meat that was meant to offend. Members of the Direct Action Everywhere animal rights group confronted the man. Some were holding signs that said, “it’s not food, it’s violence” and “meat is murder.” Not exactly original signage. Police arrived on the scene and questioned the man’s motives of eating a raw pig’s head on the sidewalk. You can watch video the entire dumb, time-wasting confrontation HERE.

RELATED: Vegans Are Absolutely Infuriated At Chris Pratt For Posting A Photo Of Lamb Meat

If these fine people want to eat portobello mushrooms casseroles with soy cheese, then let them. What they eat doesn’t affect you. In fact, let them eat tempeh until it oozes out of their ears, that means more delectable meat for you and me. And maybe with less demand for meat, prices might go down. What are you doing wasting your entire day trolling vegans? You could go to a Korean BBQ for some tangy, meaty bulgogi, galbi, and jumulleok.

And why does this guy even care about their health? Let them do whatever makes them happy. Stop poking your nose into other people’s business and preaching to them how they should live their lives based on your beliefs. This guy turned into the carnivore version of the red paint-splattering, PETA-obsessed vegan that gets triggered every time they drive by a McDonald’s and organizes boycotts of ice cream parlors that don’t serve non-dairy versions. Congratulations, you played yourself.