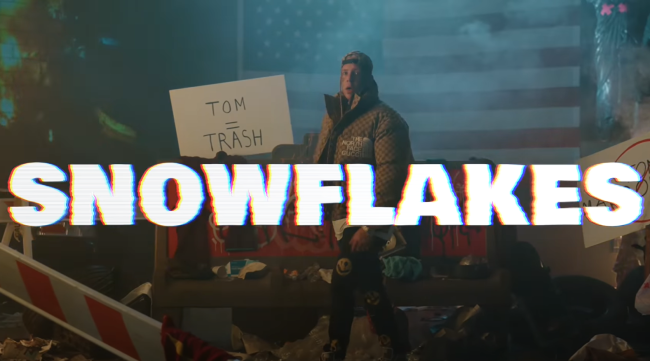 Rapper Tom MacDonald is here to say that “snowflakes melt when it’s hot.” The independent rapper released his new song titled “Snowflakes,” which is sure to hit a nerve with almost everyone. The counter-culture hip-hop artist hits harder than ever in his new track, which has already climbed the music charts in a few hours after being released.

‘Snowflakes’ Races Up The Charts

“SNOWFLAKES” #1 IN ALL GENRES IN THE UNITED STATES.

At the time of publication, “Snowflakes” was the 16th trending YouTube video for music.

No Topic Is Off-Limits For The Controversial Tom MacDonald

In “Snowflakes,” MacDonald isn’t afraid to broach any topic, no matter how much it will outrage the listener. MacDonald touches on several social and political hot-button topics such as capitalism, guns, communism, and race relations.

“Trigger warnings used to be on TV for seizures,” MacDonald raps. “And now they’re everywhere to protect millennials’ feelings.”

“Black folks and white folks divided by the news,” he says in the song. “But we are all the same, we are red, white, and blue.”

“Empowering women used to be different than this before,” the lyrics for “Snowflakes” read. “The role models got OnlyFans or dance on a stripper pole.”

“If you lie to the government, they’ll put you in prison,” MacDonald notes. “But when they lie to all of us, it’s called being a politician.”

What Are Tom MacDonald’s Politics?

MacDonald raps about conservative values in many of his songs, “Snowflakes” is no exception. The music video for the song features transgender conservative political commentator Blaire White.

“I’m not pro-Trump. I’m not anti-Trump. I’m pro-people. I’m not taking sides in ‘White Trash,'” MacDonald said of his music video. “I’m showing understanding and being sympathetic toward a group of voters who rarely get the luxury of either of those things.”

I’m not pro-Trump. I’m not anti-Trump. I’m pro-people. I’m not taking sides in “White Trash”. I’m showing understanding and being sympathetic toward a group of voters who rarely get the luxury of either of those things🤟🏻🤟🏻🤟🏻

Many Compare Tom MacDonald To Eminem

Tom MacDonald receives comparisons to Eminem, which is music to his ears since he idolizes Marshall Mathers.

In fact, MacDonald dropped $100,000 to purchase a non-fungible token (NFT) of the instrumental for “Stan’s Revenge,” a followup to Slim Shady’s remarkably successful Stan from 2000.