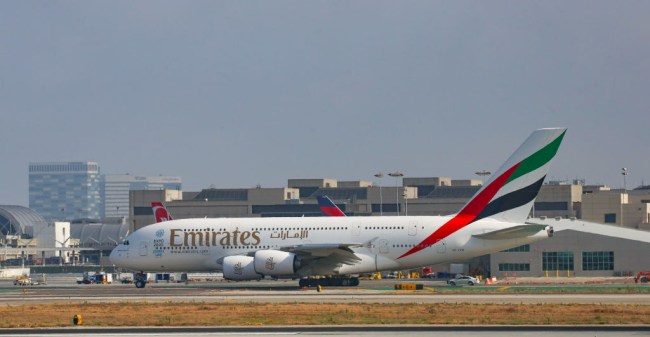 Quite possibly the worst place to get sick is on an airplane traveling across continents. Well 100 passengers and airplane crew members reportedly experienced that wrath on an Emirates airline Airbus A380 superjumbo jet traveling from Dubai to New York City, resulting in the plane being quarantined.

According to Fox News, officials from the Centers for Disease Control and Prevention arrived on the tarmac around 9 a.m. shortly before Emirates Flight 203 landed to treat the droves of people who reported feeling sick, some with symptoms of a cough, headache, sore throat, and fever.

“Health officials are processing tests now to determine the cause,” Phillips tweeted. “Symptoms still pointing to the flu.”

Rapper Vanilla Ice was on the Airbus A380, the world’s largest commercial passenger aircraft, and tweeted out the scene before all details were made clear.

So I just landed from Dubai and now there is like tons of ambulances and fire trucks and police all over the place pic.twitter.com/i9QLh6WyJW

So I just landed in New York coming back from Dubai and now I’m stuck on the runway with like 1000 police, ambulances, fire trucks, this is crazy. https://t.co/U2ejDUmIUa

This is crazy. Apparently there is over 100 people sick on the bottom floor, so happy I’m up top, it’s a double-decker plane 380

Emirates posted a series of tweets apologizing for its role in carrying the mystery illness.

We apologise to our customers for any inconvenience caused. The safety and wellbeing of our customers and crew is always our top priority. #EK203 4/4

What still remains unanswered is whether the sickness was due to a bacteria or toxin or virus that passengers were exposed to on the plane. We’ll keep you posted when more information becomes available.