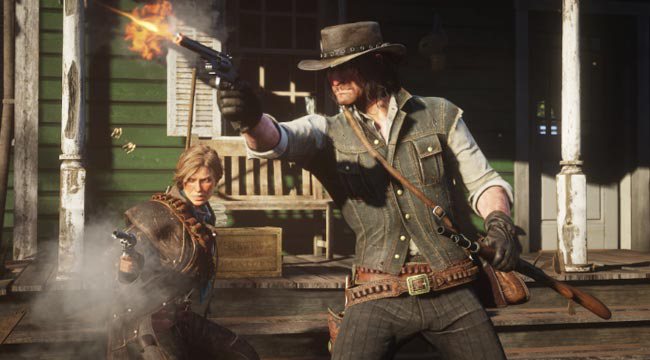 The amount of Easter Eggs to be found in Red Dead Redemption 2 is pretty much endless. There have already been countless YouTube videos recapping the number of Easter Eggs within the game. This is a pretty good roundup that we featured recently.

Some Easter Eggs include things like horses killing people, the ability to draw snow penises, and other Easter Eggs are based on America’s creepy history. One gamer appears to have uncovered a super dark side quest that’s rooted in American serial killer lore.

The scene involves you stumbling upon a family that invites you in for dinner. Things get weird in a hurry when you realize the couple you thought was married are actually siblings, and they’re way too close for comfort. In the game, you then wake up in a mass grave and have time to exact your revenge. In real life, this mass grave was found in the late 1800s after the Bender family filled it with passersby after killing them and pawning their possessions.

While I'm at it, here's another one of the cool little historical easter-eggs @RockstarGames snuck into Red Dead Redemption.

If you're riding around near Pleasance, you'll find the Aberdeen Pig Farm…

If you rock up here around dusk, the very, very large Bray Aberdeen will invite you in for dinner, introducing what you assume is his wife, Tammy.

Shortly afterwards you realise that they are siblings – altogether far too intimate siblings. pic.twitter.com/qliyiIc17g

After a quick trip upstairs, during which Tammy tells you that there might be a roll in the hay later, you eat dinner, finishing with a few drinks…

…& next thing you know, you wake up in a mass grave.

At this point, you can either cut your losses, or go get your money back.

Here’s where the guy who uncovered this as a real part of American history begins to explain the story of the real family.

Now, I went and killed them, I killed them both. I got my money back, and I set their house alight with cleansing flame…

…but that's not why you're reading.

As it turns out, the Aberdeen's have a real life historical analogue!

The Benders were a German family that lives in Kansas in the 1870s. John, Elvira, Kate & John Jr all shared the same small lodgings, that they also operated as a guesthouse, near Osage.

Locals remarked that John Jr, and Kate were altogether way too familiar with each other… pic.twitter.com/g1iH6PvLNm

Now, folks went disappearing near Osage heading west, but for a while people just assumed it part of the dangers of the road.

It wasn't until 1873, after a few relatively high-profile individuals failed to return from trips in the area, that the Bender lodgings were looked at. pic.twitter.com/YOrAWxGerS

Where’d they go? I need this answer.

The house itself was empty, with quite a few possessions left behind. The place, however, *stank*!

Investigations discovered that this was due to the fact that the packed dirt floor of the house was sodden with blood!

Eight bodies were eventually recovered from the yard of the Bender House, their skulls smashed and their throats cut.

It was a huge deal – vigilante squads ride from miles looking for the Benders, but no conclusive trace was found. pic.twitter.com/k4zWPRooQb

What they think happened is that the visitor would be seated with his back towards a canvas sheet.

Kate would then cut the throat, & the body taken to the cellar. pic.twitter.com/ZXwT2TQrTb

The goods taken from the Bender's victims would then be sold on at the guesthouse, or pawned in a larger town.

Despite years of study by historians, it's not known conclusively how much they were able to steal before the upped sticks & escaped.

Unlike reality, you actually get to revenge yourself on the swine that stole your money in RDR2, and there's no ambiguity in regards to their fate – you can very much kill them.

I just thought the allusion to the Bender case was pretty darn neat – well done @RockstarGames!

How the hell anyone from Rockstar Games knew this story is beyond me. We do live in an era where people are borderline obsessed with serial killer lore and unsolved mysteries, but this one’s pretty damn obscure. They’ve either got an expert on the team or they brought in someone from the outside to help them create this Easter Egg based on American history.

For more on Red Dead Redemption 2, you can click that link and check out the BroBible archives!