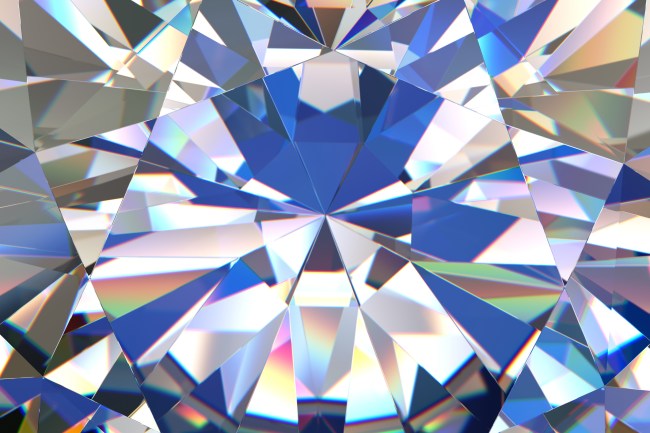 It’s weird to think there are still places in North America where you can just dig up dirt and find diamonds. There’s the Crater of Diamonds State Park in Arkansas where tourists find diamonds all year. And there’s Canada’s Northwest Territories where miners just found a 552-carat yellow diamond that looks like a cross between a pirate’s tooth and a Chiclet that’s been wrapped in gold foil.

At 552-carats, this is the largest diamond ever found in North America and it’s said to be roughly the size of a chicken egg. Its value isn’t yet known because it’s rough and uncut. The gigantic diamond will be cut down into a gem and then appraised.

This record diamond is THREE TIMES LARGER than the previous record. It was found at a mine in the Northwest Territories by the Dominion Diamond Mines and Rio Tinto Group. The group said that this diamond is ‘gem quality’ which means it’s clear/pure enough to be cut down and made into jewelry.

Miners just unearthed the biggest diamond ever found in Canada 😱

The 552-carat yellow gem is almost 3 times the size of the next largest stone discovered in North America pic.twitter.com/wUyZBf0wyl

We’ve got a bonafide record on our hands here that’s sure to break more records once it goes up for auction (if that happens). The other option is they could cut it down into multiple gems of enormous size. According to Bloomberg, this is the 7th largest diamond found worldwide this century, white or yellow, and it’s among the 30 largest stones every found.

#DominionDiamondMines says the largest diamond ever found in North America was unearthed at the #DiavikDiamondMine in October. (Photos courtesy of the company.) #NorthwestTerritories #Yellowknife #Diavik pic.twitter.com/wJXBukCEx5

“We can label it fancy yellow, but beyond that, due to its rough nature and the abrasions received through the processing facility, that’s all we can comment on,” Durgin said in an interview. “It’s very hard to give a ballpark estimate. It all depends on, again, the cutting and the resulting stone it ends up.” (via)

Miners find chicken-egg-sized diamond 💎in Canada's frozen north. (Have we considered that it could also be the mosquito in amber cane? 🦕) https://t.co/Zo1qQFuDNd via @markets

Despite yellow diamonds selling for less than their clear/white diamond counterparts, the mere fact that this diamond is a record-holder for being the largest ever found in North America and among the 30 largest ever found in history, I’m pretty certain that it will sell for a record amount. It’s historically important and it’s absolutely gigantic.

Still, at 552-carats it pales in comparison to the largest diamond ever found. A 3,106-carat diamond discovered near Pretoria, South Africa back in 1905.

A 552-carat yellow diamond was recently unearthed in Canada — the largest ever found in North America https://t.co/WXUfV0pbcF pic.twitter.com/Q5jbyHCA8e

For more on this story, you can visit Twitter Moments and/or Bloomberg.