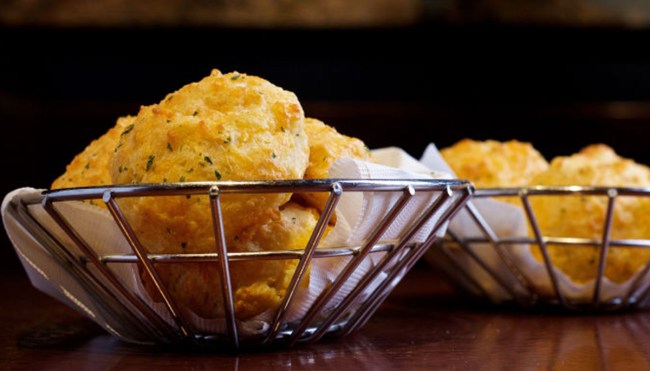 As a New England native raised on lobster rolls piled with meat from crustaceans plucked fresh from the pot and mussels I personally harvested from the rocks they call home on the shoreline, I don’t necessarily have anything against Red Lobster. However, there aren’t many occasions (if any) where I’d willingly go out of my way to eat there (although I’d be lying if I said I wasn’t tempted by the alcoholic Siren that was the Mountain Dew margarita that appeared on the menu last year).

With that said, I somehow found myself dining at the restaurant for the first time when I was in my early 20s for reasons I can no longer recall. Thanks to my inherent seafood snobbery, basically all of the items I tried left plenty to be desired—with the very notable exception of the Cheddar Bay Biscuits that accompanied whatever forgettable entrée I ordered.

I only had to take a single bite to realize why those warm, cheesy lumps of carb-based goodness have developed one of the most devoted cult followings the casual dining world has to offer. The internet is littered with copycat recipes by bakers who’ve attempted to reverse-engineer the treats that made their grand debut back in 1992, and around a decade ago, Red Lobster did the world a huge solid when it released a premade mix that allowed any Cheddar Bay Biscuits disciple to snag a box and whip them up at home.

Of course, that requires you to devote more time and effort than simply taking some frozen biscuits out of the freezer and popping them in the oven, and on Monday, Red Lobster dropped an absolute bomb when it revealed you can now do exactly that.

According to The Takeout, Red Lobster’s frozen Cheddar Bay Biscuits officially hit the freezer aisle in Walmarts across the United States over the weekend, so if you’re in the mood for some, all you need to do is make a visit to the retail giant, head back home, and wait 25-30 minutes for them to bake before brushing the top with some melted butter mixed with the seasoning packet in every box.

You do have to wonder if Red Lobster will end up regretting this decision after realizing it’s given customers much less incentive to actually eat at Red Lobster, but I guess we’ll just have to wait and see.