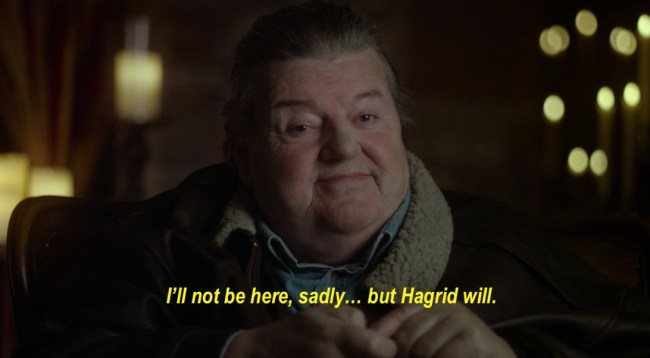 I remember when I was a kid reading the Harry Potter books before the movies came out, Hagrid, the beloved Keeper of Keys and Grounds of Hogwarts School of Witchcraft and Wizardry, was the easiest character for me to imagine in my mind (other than Harry Potter himself, who was always featured on the cover illustration.) And how could he not be? He’s an 8’6″ tall giant with a heavy metal haircut and a lumberjack beard.

As a result, other than Potter and Professor Dumbledore, Hagrid was the character that I had the most expectation for when the movies hit theaters, and needless to say, Robbie Coltrane, the Scottish actor who played him in all eight films, absolutely crushed it as he was able to imbue Hagrid will all of the warmth that made him one of Harry’s most trusted allies ever since the story first began.

Truth be told, I never knew Coltrane’s name — turns out he’s had himself quite a career outside of the Wizarding World franchise — until this delightful clip of him detailing what the legacy of Harry Potter are and what they mean to him. In case the powers that be start scrubbing the video from the internet, I’ve transcribed the quote and tossed in a couple of ways to view it below:

“I just think it’s the end of an era,” Coltrane said of his time working on Harry Potter. “My children had grown up during it, of course. The legacy of the movies is that my children’s generation will show them to their children, so you could be watching them in 50 years’ time, easy. I’ll not be here, sadly, but Hagrid will.”

Unsurprisingly, longtime fans of the franchise took to Twitter to share how touching they thought Coltrane’s comments were. Making art that you know will outlive you must be such a spiritually rewarding emotion. What a guy.

Robbie Coltrane got me, saying people will be watching HP in 50+ years time and that he won’t be here but Hagrid will… 😭 https://t.co/OJnrdHcDB3

When Robbie Coltrane said “I won’t be around in 50 years but hagrid will be” #HarryPotter20thAnniversary pic.twitter.com/75wHXSCZny

“People will be watching in 50 years time, yes. I’ll not be here sadly… but Hagrid will.” -Robbie Coltrane, Harry Potter Reunion.

I sobbed. Hagrid’s always been a favorite of mine. Robbie Coltrane did such a beautiful job with his character. https://t.co/HbPTzWDnjW

robbie coltrane (hagrid) said that even though he wont be here anymore years later, hagrid will be 😭

There were definitely some 😭 moments during #HarryPotter20thAnniversary but damn, Robbie Coltrane got me at the end. pic.twitter.com/MypWjqSlKo

This entire part of Robbie Coltrane's interview had me all teary-eyed. THE WAY HIS ENTIRE FACE STARTED TREMBLING! He will always be the GREATEST Rubeus Hagrid! #HarryPotter20thAnniversary #ReturnToHogwarts https://t.co/zJZl0sP1PP pic.twitter.com/V6bvswyWCv

"The legacy of these movies is that my children's generation will show them to their children. So, you could be watching them in 50 years time, easy. I'll not be here sadly… But Hagrid will." pic.twitter.com/0tmDYTa2RI

"The legacy of these movies is that my children's generation will show them to their children. So, you could be watching them in 50 years time, easy. I'll not be here sadly… But Hagrid will." —Robbie Coltrane pic.twitter.com/mdVxbR3zjp

RELATED: Emma Watson Visibly Stole Rupert Grint’s Soul, Described ‘Harry Potter’ Kiss As The ‘Most Horrifying Thing’ She Ever Had To Go Through