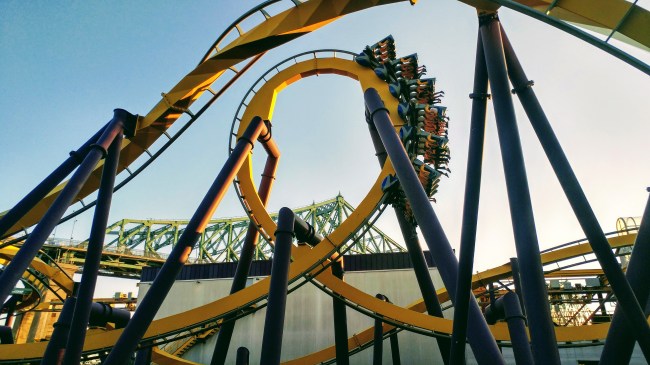 The Red Sox overcoming insurmountable odds to win the 2004 ALCS. Michael Jordan fending off a case of the flu (that was actually food poisoning) to help secure his fifth NBA title. Tiger Woods winning the 2019 Masters after several back surgeries and hitting rock bottom so hard he left an outline in the shape of his body like he was Wile E. Coyote.

These are some of the greatest comeback stories of all time, as there aren’t many things more inspiring (and stress-inducing) than a team or individual overcoming a huge deficit, injury, or any other major obstacle to pull off the improbable.

Now, Jared Ream has cemented his name into the annals of historic comebacks after losing 190 pounds just so he could ride a roller coaster.

According to WKRC, Ream is an absolute roller coaster fiend who was relegated to watching them from the sidelines seven years ago because he could no longer fit on most of his beloved rides due to his weight. However, everything changed last August when King’s Island theme park in Mason, Ohio announced its plans to build a new giga-coaster—the term for any ride featuring a drop of at least 300 feet—called Orion.

When this development came to his attention, he knew he had no other option but to make a change, saying, “The day that they announced Orion was the day in which I said to myself, ‘I will lose this weight.’ I went and I bought a scale, I weighed myself that day and I was 430 pounds.”

In order to slim down, Ream reduced his diet to 2,000 calories a day, regularly worked out in his garage, and even jogged in place while getting his binge-watch on. Thanks to his efforts, he managed to shed a whopping 190 pounds and had no problem strapping into his seat when he rode Orion for the first (but certainly not the last) time earlier this month.

Man, this dude is an inspiration. This is a guy who set a goal for himself and he absolutely crushed it, and from now on, he gets to savor the fruits of his labor in the form of adrenaline-filled twists and turns everywhere.