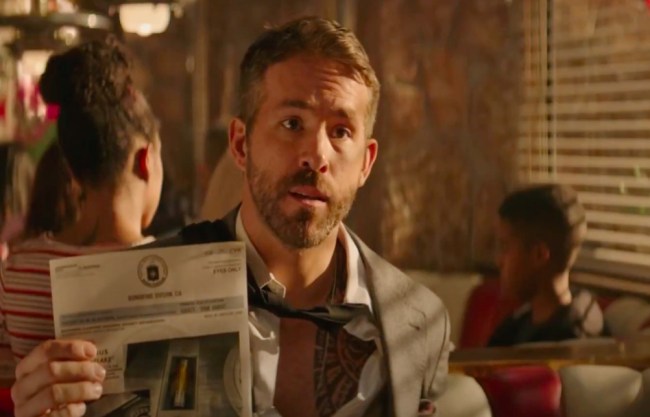 I don’t know if the Screen Actors Guild has defined what differentiates a “cameo” from a regular movie role, but in general, it seems like they’re designed to go pretty unnoticed (and by “pretty unnoticed” I mean they’ll usually make you go, “Oh hey, that person still exists” before forgetting about it entirely). However, I suppose Ryan Reynolds is too famous to go unnoticed at this point.

It seems like Reynolds is in everything these days, so I guess it was only natural that he’d pop up at some point in Hobbs & Shaw, where he played his signature character: Guy Who Is Basically Ryan Reynolds Only With A Different Name.

It may have been a little too long to be a traditional “cameo,” but at the same time, calling it a “role” would be doing that word a disservice. Regardless of what it was, it was apparently good enough to make someone at Universal with enough power to make these kinds of decisions to say, “Hey, let’s make an entire movie based off that CIA guy.”

According to We Got This Covered, the studio is attempting to really stick it to everyone out there who’s asked, “Do we really need another one of these things?” by making a spinoff of a spinoff starring Reynolds along with Johnson in a supporting role (nothing is confirmed at this point but the outlet says the sources that provided the information have proven to be reliable in the past).

I’m sure this will make boatloads of cash, but if I was in charge of making any kind of spinoff with Ryan Reynolds, it would be a movie based on the gin commercial where he gleefully murders blueberries.

My secret is now Cage-Free. pic.twitter.com/gdmySvDK0W

Actually, wait. I’m going to change my answer to that time when he was a painter in that Taylor Swift music video.

Sadly, I don’t get to learn about the backstory of that painter. I just get another Fast & Furious movie.

This power duo has already been working together on the upcoming Red Notice, so they’ve already had time to practice their charming chemistry. There’s no telling how long we’ll have to wait to see if this gets the green light, but Hobbs & Shaw 2 is already in development, so at least we’ll have that to help tide us over.