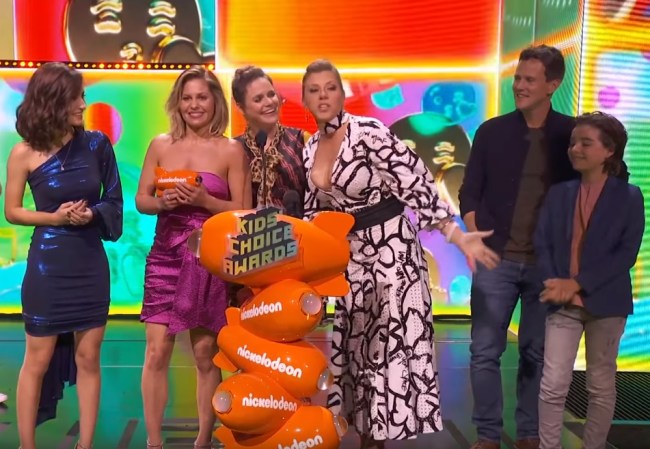 Danny Tanner, Uncle Jesse and DJ Tanner stood by Aunt Becky’s side during her legal issues stemming from the college cheating scandal. Full House actors Bob Saget, John Stamos, and Candace Cameron Bure talked about love regarding Lori Loughlin’s arrest for her involvement in a nationwide college bribery scam that helped get her daughters Olivia Jade and Isabella into USC.

Candace Cameron Bure was one of many Fuller House castmembers who accepted the award for “Favorite Funny TV Show” on Nickelodeon’s Kids’ Choice Awards. Cameron Bure’s speech didn’t mention Loughlin by name, but it definitely was all about standing by Aunt Becky in her most trying times.

“A loving family sticks together no matter what,” Candace said during the award show. “They stick together through the hard times, they support each other, they encourage one another, they pray for each other and they stand by their side, no matter how tough it gets.” Whoa baby!

TMZ caught up with Bob Saget and asked if he still supports Loughlin. “I just love who I love,” Saget responded. “Candace said it really good at the Kids’ Choice Awards: ‘You love who you love.'” Saget added, “Life’s complicated. I don’t like talking about it.”

John Stamos was asked if he was still on Lori’s side and started to say “Yes,” but decided to not answer the question instead. Uncle Jesse did promise to address the situation. “I will at some point. I’m just not ready yet,” Stamos told TMZ.

Jodie Sweetin AKA Stephanie Tanner also accepted the Fuller House award but did not mention Aunt Becky. When TMZ confronted her two weeks ago, she also did not comment on the allegations facing Loughlin. Stamos also had no comment when asked two weeks ago, he couldn’t even muster that the court should have mercy.

Loughlin and her husband Mossimo Giannulli are accussed of paying $500,000 to bribe a University of Southern California crew coach to say that Olivia Jade and Isabella Giannulli were great rowers that deserved to be admitted to USC for their rowing prowess despite they don’t row. Loughlin could be in big trouble and faces up to 46 months in jail.