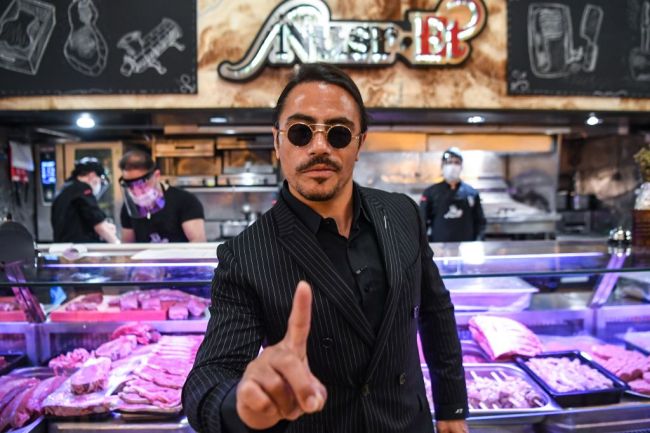 Is America the land of opportunity or what?

A guy sprinkles salt over a plate weirdly and he’s rewarded with 39 million Instagram followers, a $50 million net worth, restaurants in the most expensive cities in the world, customers who are willing to pay $15 for a Red Bull, and an inflated sense of self-worth.

There is not one child in America that wants to be Salt Bae. Not one. https://t.co/br5auSsbHY

Mr. Bae already went viral this week after a patron at Salt Bae’s London restaurant, Nusr-et Steakhouse, posted a photo of his $2,457 dinner tab for four people. The bill included four Red Bulls for $59.66 and a gold leaf tomahawk steak for a bonkers $854.

English chef Tom Kerridge, who owns the first pub ever to hold two Michelin stars, reacted to the Salt Bae’s viral craze with a sign outside one of his restaurants.

Salt Bae must’ve been a leper in a previous life because another clip has gone viral of the chef constructing what can best be described as ‘Drunk At 3 AM And I’m Fresh Out Of Groceries.’

This is what people are spending their hard earned cash on? pic.twitter.com/WeCMdnvIxF

And have absolutely no idea what this monstrosity is but I can guarantee it is two months rent.

He ain’t even cutting the bread. Just tearing it like he boutta feed a bird

Bread, oil and meat…..this is the chefs special …nearly a grand ?!!? pic.twitter.com/DeFLgWDN1v

I just realised the salt goes past his FLESHY(and maybe sweaty) arm before the food pic.twitter.com/h9MRi6DX8S

On some level I respect Salt Bae for capitalizing on his five minutes of viral fame more effectively than perhaps anyone else in history, but it’s still incomprehensible to me that people think this is good food https://t.co/4ilcyCViik