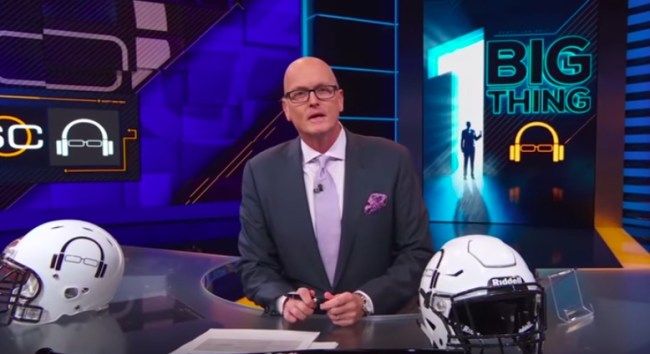 I really wasn’t planning on getting choked up on this random Wednesday, but I’m sure as hell glad I’m working from home today.

Scott Van Pelt closed out his show Tuesday night with a heartfelt tribute to his dad, Sam, who passed away 31 years ago yesterday. The tribute, which SVP called the most personal thing he’s ever written for the show, touches on how he’s channeled his grief since and how leaning into the sorrow is a newfound necessary coping mechanism for him.

The segment made me appreciate that my parents are still around and thankful that my mom will call me randomly to ask me what I’m having for dinner.

Here’s the meat and potatoes of the segment, in written form:

“What I’d give to have just five minutes today to tell him how the story has gone since 1988. To introduce him to the grandkids, one of whom is named Sam, after him. I’ve always avoided focusing on the day of his passing and I’ve chosen to talk about birthdays instead. To celebrate them, not obsess about the death day, but this year I’m surrounded by it.

My good friend Jill buried her dad today. She said she wanted to speak at his funeral but wasn’t sure she could do it. I told her to think about love, I told her should and she’d be glad she did. Well, she did and I’m told she was great.

Tomorrow I head to Maryland to be there for one my boys who just lost his dad. That funeral is Thursday morning, and I realized that I’ve been pretty good at giving advice to those who deal with this specific pain. I tell them when the grief comes not to run from it, not to bury it because it grows and it gets a whole lot heavier to carry around, because it does.

I encourage my friends to share it, to articulate it, to say it out loud. It’s time to take my own advice. Today isn’t worse than another day, it’s just another day. But to try to swallow it and ignore it today would be a mistake.

So maybe this is selfish to do it here, but it’s intentional, because we all have our pain to deal with. And maybe it helps somebody else or encourages someone to tell a loved one who’s still here how you feel. Maybe it doesn’t. Either way, I miss you dad today and every day, and I hope you’d be proud of how it all turned out.”

Van Pelt also started an amazing thread on Twitter with people sharing their personal losses. It’s one of those rare times on the internet when people are wholly supportive.

I've used One Big Thing to talk about a lot of different topics since our show began. I've never written anything quite as personal. Dad has been gone 31 years. Not sure how it's even possible. It closes the show tonight.

I lost my Dad back in April, he was only 49 and I was 28. We had just gotten back from a fire alarm and sat down to a late dinner when I found out. Finished my shift surrounded by the best group of guys you could ask for. Miss my Dad and talk to him everyday!

Three months for me. I think about him everyday. I’m a religious guy, so I’m hoping I’ll see him again. I just want to know he still exists somewhere out there. I look up at night, every night, and ask God if he’s with him in heaven. The ole ‘give me a sign, God!’

Thank you @notthefakeSVP Lost my Dad about 17 years ago and find myself still talking to him. Wish he could’ve met my kids even though I see him in their eyes every day.

4 year anniversary of my Mom’s passing today. I think about her all the time, every day.

5 months gone. Taught me everything I know about sports and life.