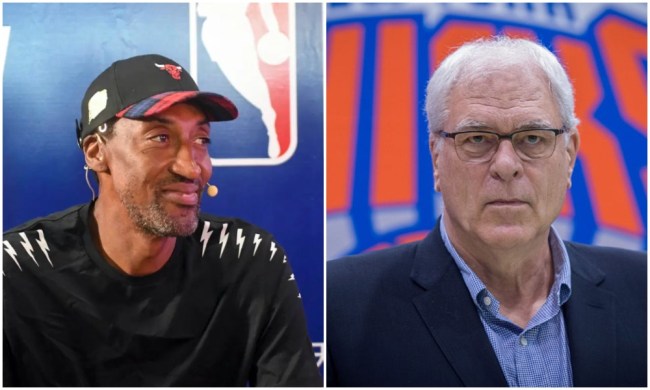 Scottie Pippen has been on a bit of a warpath as of late and nobody seems to be safe. Over the course of the last week, Pippen outed Michael Jordan as a cheat, took shots at Kevin Durant, called Charles Barkley fat, and has now called Phil Jackson a racist.

Pippen’s claim that Jackson is a racist stems from a specific late-game situation during Game 3 of the 1994 Eastern Conference Semifinals. Jackson decided to give the final shot to Toni Kukoc instead of Pippen. It all worked out in the end as Kukoc hit the game-winner, but in a recent interview with GQ, Pippen called Jackson’s decision a “racial move.”

Pippen joined ‘The Dan Patrick Show’ on Monday morning Patrick brought up that specific statement from the interview. Patrick explained to Pippen that by calling it a “racial move” then he is calling Jackson a racist, which Pippen responded to by saying “I don’t have a problem with that.”

Patrick doubles down with his question and straight-up asks the seven-time All-Star if he thinks Jackson was or is a racist. Without hesitation, Pippen says “oh yeah.”

The exchange begins just after the 1:00 mark in the video below. Warning: Pippen talks in the third person, and it’s incredibly annoying.

DP: ".. By saying it was a racial move then you're calling Phil Jackson a racist…"

Pippen: "I don't have a problem with that."

Exchange with @ScottiePippen on Phil's decision to have Kukoc take final shot against the Knicks pic.twitter.com/pH2aDLMDcQ

Pippen thought he deserved the final shot in that game, and if we’re strictly talking about resumes then he absolutely did, but that’s not how great coaches operate in crunch time. Despite his absurd comments in the interview, Pippen isn’t dumb, he has to know that everyone was expecting him to take that final shot.

Instead, Jackson gave it to Kukoc, the Bulls beat the Knicks that night but ultimately lost the series in seven games.