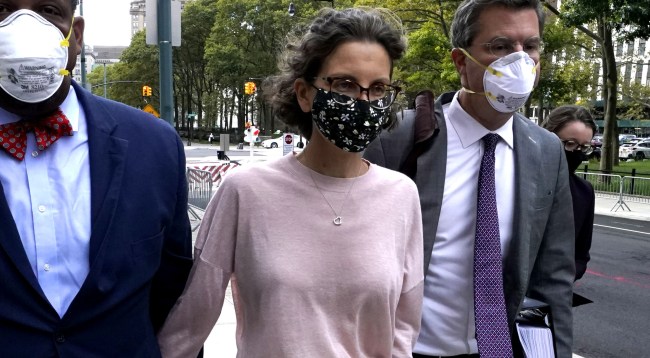 On Wednesday, 41-year-old Seagram’s liquor heiress Clare Bronfman was sentenced to more than six years in prison for her role in the Nxivm sex-slave cult.

Bronfman’s 81-month sentence is the first involving the top members of Nxivm. The cult’s leader Keith Raniere and former Smallville actress Allison Mack, along with three others are still awaiting their sentences.

Brooklyn federal court Judge Nicholas G. Garaufis said while issuing Bronfman’s sentence, according to the New York Post, that “used her incredible wealth and attempted to use her social status and connections not only to support Nxivm’s work, but also as a means of intimidating, threatening, and exacting revenge upon individuals who dared to challenge its dogma.”

Bronfman had previously pleaded guilty to charges of conspiracy to conceal and harbor an illegal alien for financial gain and fraudulent use of identification.

But prosecutors have said that Raniere — who ran a master-slave group within Nxivm called DOS, where women were branded with his initials and forced to sleep with him — could not have committed his crimes without the help of Bronfman and her $210 million fortune.

Before her sentence was handed down Wednesday, nine women who were victimized by Nxivm also tore into Bronfman, calling her a “dangerous megalomaniac” and “predator.”

On Tuesday, prior to Bronfman’s sentencing, five supporters of Nxivm and its leader Keith Raniere, including the wife of Allison Mack, Nicki Clyne, who quit her job acting on Battlestar Galactica to follow Rainere, actually defended the cult.

In an interview with CBS This Morning, Clyne said, “It’s very unfortunate the way that the word ‘Nxivm’ has been applied and is now synonymous with the term ‘sexual cult,’ which I don’t even know how to define what that is.”

When asked about charges actress Sarah Edmondson made last year, in which she said admission to the cult involved giving their “master” (recruiter) naked photographs or other compromising material as insurance to prevent anyone from revealing Nxivm’s existence and getting branded with a two-inch-symbol below their hip – in Edmondson’s case the brand was Raniere’s and Mack’s initials – Michele Hatchette, another Nxivm supporter, replied, “I think there is a difference between being branded and getting a brand.”

Neither Hatchette nor Clyne would deny thet had been branded. They also decling to answer whether either of them had sexual relations with Raniere.

In the civil lawsuit filed in January against Raniere and other leaders of NXIVM, some former members of DOS said they were forced to disrobe during the branding ceremony, read from a script stating they had requested the branding, and then lie down on a table and submit to the branding with a cauterizing iron in the pubic region. It was was done, they said, without anesthesia.

In audio played during Raniere’s trial, he can be heard planning the branding ceremony with Mack.

“Do you think the person who is being branded should be completely nude and sort of held to the table sort of almost like a sacrifice? That’s a feeling of submission,” he told Mack.

More than 80 victims have come forward with allegations against Raniere, who was convicted of seven charges, including sex trafficking and racketeering and will be sentenced on October 27th. He faces the possibility of up to life in prison.