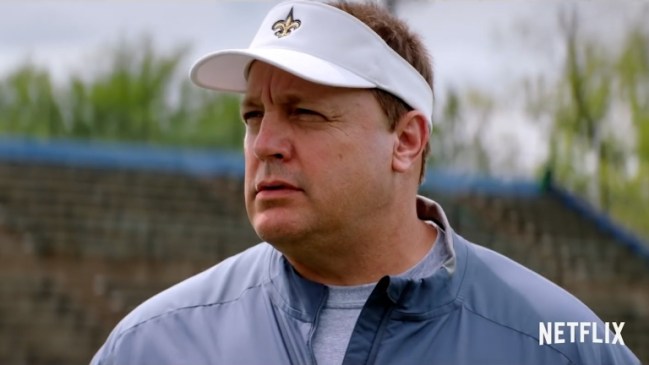 Back in December, we brought you the story of the internet absolutely clowning on the first trailer for Netflix’s Home Team, a film about then-New Orleans Saints head coach Sean Payton as he served a one-year suspension for Bountygate.

Perhaps unsurprisingly, the final product has turned out just as silly as the trailer made it seem, especially when it comes to the absurd cameo from Payton himself.

The release of Home Team — which hit Netflix on Friday, January 28 — certainly comes at an interesting time as Payton just announced earlier this week that he would be “stepping away” from coaching the organization.

Payton, 58-years-old, still has three years left on his contract with the Saints, meaning if he were to try and coach elsewhere during that timespan, that team would have to trade for Payton’s rights.

At least as far as the sports media world is concerned, Payton’s sabbatical won’t last for long as many expect him to return to coaching in the NFL in the coming years. There is particular speculation that he could return to the Dallas Cowboys, where he served as assistant head coach and quarterbacks coach from 2003 to 2005.

Payton is certainly doing his part in feeding fuel to the fire, as he recently went on The Dan Patrick Show to breakdown how Dak Prescott and the Cowboys’ offense mishandled the final seconds of their Wild Card weekend matchup against the San Francisco 49ers.

“Well, look, they’re trying to get in touchdown range, and they ran a draw,” Payton said on The Dan Patrick Show. “We would typically throw a pass and down, down. Ultimately, I think two more steps for Dak. He’s got to slide a little quicker. He’s up, and the ball has to go to the umpire. And then, let’s go. We can never hand the ball to the center.”

If he wasn’t already because of Dan Quinn and Kellen Moore, Cowboys head coach Mike McCarthy is certainly going to be looking over his shoulder now that Payton is looming out there.