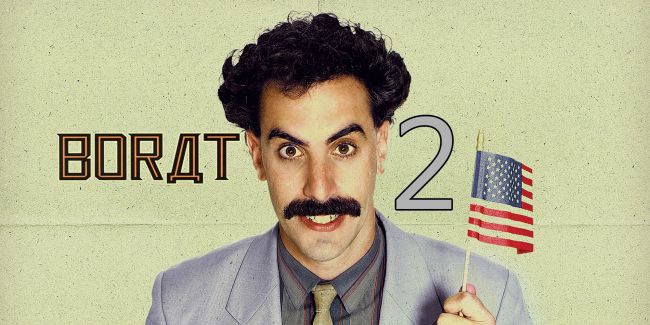 2020 has mostly sucked, but there are a couple of bright spots: For example, working from home in pajamas all day. Eating frozen waffles for dinner between Call Of Duty Warzone sessions because meal times are just an irrelevant social construct. High Life Mimosa Beer!

When it comes to comedies, there’s been some very good (Palm Springs + Bill and Ted: Face The Music)  mixed with a lot of meh (Hubie Halloween).

Which brings us to a cultural moment that might be the highlight of the year: Sacha Baron Cohen’s out-of-the-blue return to form for Borat 2, preposterously named Borat Subsequent Moviefilm: Delivery of Prodigious Bribe to American Regime for Make Benefit Once Glorious Nation of Kazakhstan.

No stranger to political-comedy controversy after 2014’s The Interview, Seth Rogen says he’s watched Borat 2 “around six times” over the last few months. Rogen says it has “a few of the funnest scenes I’ve ever seen in a movie,” which is promising considering how groundbreaking the first Borat movie was.

I’ve seen #Borat2 around six times over the last few months, and I can’t wait to watch it a seventh. It’s crazy and wonderful and couldn’t be more timely. It also has a few of the funniest scenes I’ve ever seen in a movie. I’m excited for you to see it.

Yes and the woman who plays his daughter is fucking unbelievable.

That’s a big, big statement. The first Borat was one of the funniest movies I’ve ever watched in a movie theater: It came out my junior year in college and the theater was packed to the gills for it. It was so much fun because, well, it’s one of those movies where everyone in the audience is in a rapturous uproar from beginning to end.

I can’t wait to experience that again, just from the privacy of my own home while shit-posting on Twitter.

Considering the breakaway success of the first Borat movie and how phrases like “VERY NICE!” “MY WIFE!” and “GREAT SUCCESS!” became cannon in its afterglow, it’s incredible that Sacha Baron Cohen could pull off Borat pranks while flying under the radar, totally incognito.

Somehow he managed to pull it off, which makes it all the more amusing.

Congratulation to great friend of the Kazakh people @realDonaldTrump for winning debate today! Impressive and amazing result for a strong premier who always put America and Kazakhstan first! pic.twitter.com/qLljQ8b5UU