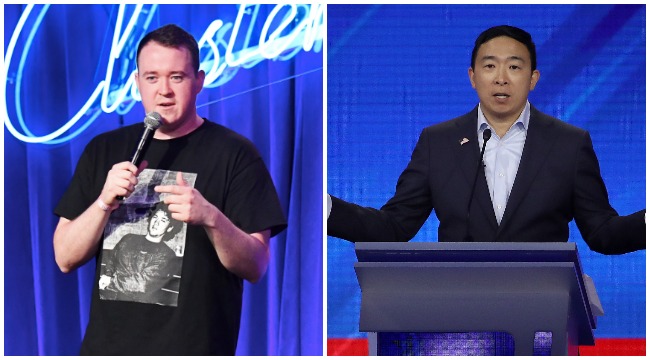 Saturday Night Live announced Shane Gillis as one of three new additions to its cast for the upcoming 45th season last week, and in the blink of an internet eye, he was fired after clips of him making derogatory remarks about Asians and gays resurfaced.

A spokesperson on behalf of SNL creator Lorne Michaels said in a statement that the sketch show was ‘not aware of his prior remarks’ and the ‘language he used is offensive, hurtful and unacceptable,’ before vowing to enhance the show’s vetting process.

Gillis, in response, was not as apologetic as he was defiant–saying he was ‘funny enough to get SNL’ before claiming to be a ‘MAD TV guy anyway.’

While former SNL comedians Norm Macdonald and Rob Schneider were appalled at the decision to fire Shane, the loudest voices on the internet felt justified.

Democratic presidential candidate Andrew Yang, an Asian American who Gillis personally referred to as a ‘Jew ch*nk’ on a Memorial Day episode of the Real Ass Podcast, fell somewhere in the middle. Yang characterized Gillis’ remarks as “cheap shots” but went on the record saying that he did not believe they warranted the comedian losing his job.

He expanded on his views during an appearance on CNN’s State of the Union:

Andrew Yang on 'SNL' cast member's use of racial slurs: "I've experienced a lot of anti-Asian racism throughout my upbringing. And it hurts." Yang adds that he also believes the country has become too "punitive and vindictive about remarks that people find offensive." #CNNSOTU pic.twitter.com/JcQVyguOcV

In the wake of the slur clips being unearthed, Yang posted on Twitter that he’s “happy to sit down and talk with you if you’d like.” It appears that a sit down is in the books, evident in Yang’s latest tweet.

Shane Gillis reached out. Looks like we will be sitting down together soon.

With over 3,300 subtweets at the time of this writing, it’s obvious people have opinions on this development.

Glad to see a presidential candidate focus on the important task of rushing to hold a bigot to his heaving bosom. As usual, a study in courage 😪

50,000 GM workers are on strike and we're about to go to war with Iran

The other end of the spectrum:

I’m glad Shane reached out and I hope you are able to find some way to redeem him. Americans are sick of cancel culture and you can perhaps teach us a lesson about how to rise above it and move on humanely.

Please invite him to your rally in Philadelphia (he is a Philly comic)!

Let's show the world what racial reconciliation and forgiveness looks like!

Good for you for wanting to hear from him. I hope he is teachable and willing to listen.