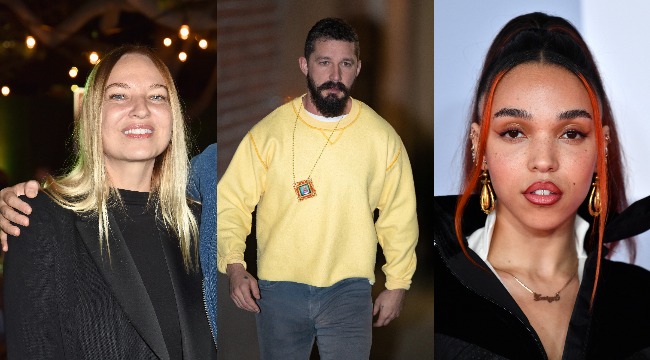 Just days after Shia LaBeouf’s ex-girlfriend and singer FKA Twigs filed a lawsuit against the 34-year-old actor for for alleged “relentless” physical abuse, including sexual battery, assault, infliction of emotional distress, and giving her an STD, another high-profile name is piling it on.

Recording artist Sia claims to have had a similar experience with Shia, posting a tweet calling him “very sick” liar and conman.

I too have been hurt emotionally by Shia, a pathological liar, who conned me into an adulterous relationship claiming to be single. I believe he's very sick and have compassion for him AND his victims. Just know, if you love yourself- stay safe, stay away. https://t.co/2NNEj9w8b1

“I too have been hurt emotionally by Shia, a pathological liar, who conned me into an adulterous relationship claiming to be single,” she wrote. “I believe he’s very sick and have compassion for him AND his victims. Just know, if you love yourself- stay safe, stay away.”

In 2015, Sia featured Shia in her music video for “Elastic Heart,” in which the two were near-naked in a cage staging a wrestling match of sorts. Its lyrics address “the overwhelming strength Sia needed to convince herself that life was worth living after coming out of a crushing relationship.” At the time of this writing, the music video has amassed over 1.1 billion streams on YouTube.

Sia’s allegations are less specific than the ones laid out in FKA Twigs’ lawsuit against the recovering addict, who claims the actor brought her so low, the idea of recovering agency over herself seemed impossible.

From our previous reporting of FKA’s allegations, which first appeared in a New York Times report:

She also claims LaBeouf had rules about how many times a day she had to kiss and touch him, wouldn’t let her wear clothing to bed, would drive recklessly, threatening to crash the car if she didn’t profess her love for him, brandished a gun and claimed he’d killed stray dogs because he wanted to know what it felt like to take a life, and would sleep with guns because he believed gang members were out to get him.

In an email back to the Times, LaBeouf admits he has been “abusive to myself and everyone around me for years” and has a history of “hurting the people closest to me.” He added that he is “a sober member of a twelve-step program and in therapy for my many failings.”