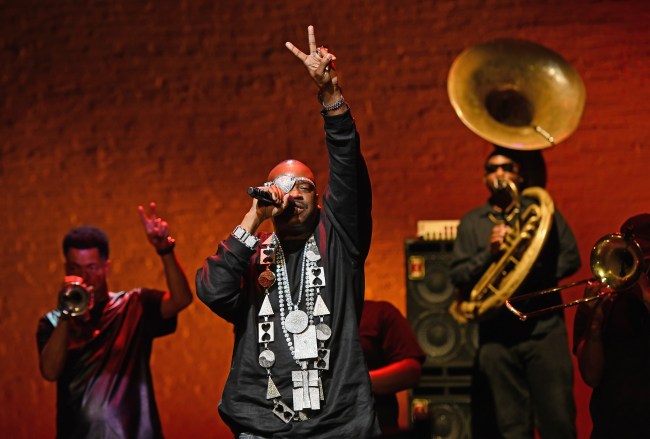 I grew up on the rhymes of Slick Rick aka Rick The Ruler aka MC Ricky D. In fact, I remember having this bro’s Yo! MTV Raps collector’s cards. I don’t remember who turned me onto his music, if it was much (much) older brother or my older cousins but I’m assuming it had to be them because Slick Rick’s musical hip-hop heyday was mostly before I was old enough to figure out for myself what kind of music I liked.

The Source has Slick Rick ranked as the #15 lyricist of all time. His music has been sampled on more than 600 tracks from other rappers including Eminem, The Notorious B.I.G., Snoop Dogg, Nas, Kanye, Beyonce, and others. He was born in London but grew up in The Bronx at a time when Hip-Hop was exploding on the scene, and he’s left an indelible impact on the genre.

Slick Rick’s a Hip-Hop icon and he’s been in the rap game longer than most millennials have been alive. This has given him ample time to accumulate a massive jewelry collection, as he points out below. He’s been gathering his collection of ice since his earliest days, a collection that includes some diamond-encrusted eye patches.

A post shared by Slick Rick The Ruler (@therulernyc)

Why the eye patches? Slick Rick was blinded in one eye as an infant by broken glass. He jumped onto the scene in 1985 when he joined Doug E. Fresh’s crew. Below, Slick Rick sat down with GQ‘s YouTube crew to show off his impressive collection of diamond jewelry. I’m not a big jewelry guy myself beyond a watch but I’m still impressed by this man’s style.

I’m torn between thinking it’s insane to keep so much money tied up in jewelry and also being blown away by HOW MUCH money this man’s got invested in his collection. I assume the vault + security required to keep that collection safe is an enormous expense. Just having a secure place to drop your jewels at the end of the night probably costs more than most people spend on their mortgages.

A post shared by Slick Rick The Ruler (@therulernyc)

But Rick The Ruler’s an O.G., and someone would have to be a complete moron to try and rob him. He’s a New York legend. If his jewelry went missing someone somewhere would know something and I assume things wouldn’t end so well for that person, or maybe not, maybe that’s the conspiracy theorist in me.