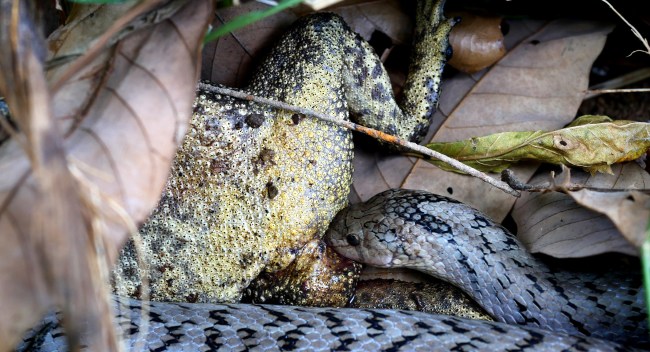 Nature is metal. This we know. But, dang… snakes putting their heads into frogs’ bodies, while the amphibians are still alive, and snacking away on their organs? And this can take hours? Good lord.

The reptilian Hannibal Lecters in question are Asian kukri snakes located in Thailand and they will even perform this grisly act on poisonous toads because they really just DGAF.

The new (and gory) observations suggested that this behavior is more widespread in this snake group than expected. Two snakes also eventually swallowed their prey whole, raising new questions about why they would extract the living animals’ organs first.

The scientists documented a Taiwanese kukri snake (Oligodon formosanus) and an ocellated kukri snake (Oligodon ocellatus) pursuing amphibian organ meals, tearing open frogs’ and toads’ abdomens and burying their heads inside, according to the studies. O. formosanus would even perform “death rolls” while clutching its prey, perhaps to shake the organs loose. As the snakes swallowed the organs one by one, the amphibians were still alive. Sometimes, the process would take hours, the researchers reported.

Note to self: never, ever visit Thailand, or Asia. There are 83 species of these kukri snakes in Asia.

These snakes use enlarged, knifelike teeth in their upper jaws to slash and disembowel toad prey, plunging their heads into the abdominal cavities and feasting on the organs one at a time while the toads are still alive, leaving the rest of the corpse untouched.

Terrified yet? Read this…

One snake, filmed on Oct. 2 in a residential neighborhood garden, emerged from a hole in the ground to bite a passing bubble frog, slicing open the frog and stuffing its head inside. Snake and frog tussled for about 40 minutes; the snake performed about 15 body rotations, or “death rolls,” during the battle, according to the study.

What the heck is a death roll?

“We believe that the purpose of these death rolls was to tear out organs to be subsequently swallowed,” said lead author of the study, Henrik Bringsøe.

Sure. Whatever you say, Hank.

“However, I wouldn’t recommend being bitten by one of those,” he added. “The thing is that they can inflict large wounds that bleed for hours, because of the anticoagulant agent these snakes inject into the victim’s bloodstream. Their teeth are designed to inflict lacerations rather than punctures, so your finger would feel as if cut apart.”