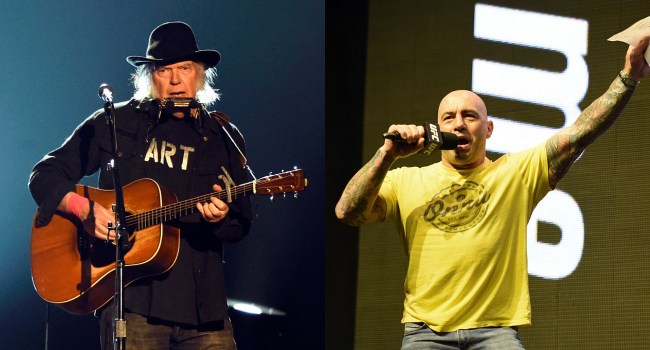 Legendary musician Neil Young gave Spotify an ultimatum of choosing between his catalog and Joe Rogan’s podcast and the streaming giant unsurprisingly chose The Joe Rogan Experience, a product they paid $100 million for just a few years ago.

“I want you to let Spotify know immediately TODAY that I want all my music off their platform,” Young wrote in the since-deleted open letter.

As a result, Young’s library of music is no longer available to stream on the streaming service, which Young — in his official statement on his website about the matter — points out “represents 60% of the streaming of my music to listeners around the world.”

“I sincerely hope that other artists and record companies will move off the Spotify platform and stop supporting Spotify’s deadly misinformation about Covid,” Young wrote on his website.

In response, to Young’s decision, a Spotify spokesman made the following public statement:

“We want all the world’s music and audio content to be available to Spotify users. With that comes great responsibility in balancing both safety for listeners and freedom for creators… “We regret Neil’s decision to remove his music from Spotify, but hope to welcome him back soon.”

The spokesman also detailed the current content policies in place at the company and added that Spotify has deleted over 20,000 Covid-related podcast episodes since the pandemic began.

Conveniently enough, though, the day after Spotify removed Young’s catalog from their service, SiriusXM announced that they would be relaunching Neil Young Radio.

“SiriusXM to present the entire musical world of Neil Young, on Deep Tracks, channel 27. Listeners will hear Young’s complete catalog, from his solo albums to his work with Crosby, Stills, Nash & Young to Buffalo Springfield and Crazy Horse, to his latest album.”

You can sign-up for SiriusXM here. There’s currently a three-month free trial for new customers.

RELATED – Dana White Is Tired Of People Trying To Cancel Joe Rogan: ‘This Is F–king America’