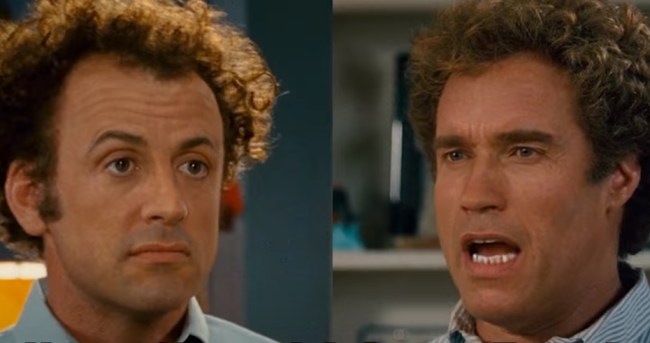 This glorious Step Brothers deepfake starring Sylvester Stallone and Arnold Schwarzenegger as Dale Doback and Brennan Huff is so tremendous that you’ll get sweaty like you’re watching Cops.

In the 1980s and 1990s, Stallone and Schwarzenegger were bitter rivals as they were both the premiere action movie heroes. Stallone had Rambo, Arnold had Commando. Arnold had Terminator, Stallone had Demolition Man. But the feud between the muscular movie stars eventually diminished and they became friends, much like how once-adversaries Dale Doback and Brennan Huff, just became best friends over their common love of velociraptors, John Stamos, and Good Housekeeping magazine.

Brian Monarch recreated a scene from Step Brothers and cast Stallone and Schwarzenegger in place of Will Ferrell and John C. Reilly, a duo as monumental as a combination of Fergie and Jesus. The two action stars become friends, who ride majestic, translucent steeds, shooting flaming arrows across the bridge of Hemdale.

“I’m Quaid, but you have to call me Dragon.”

It would be interesting to see Sly and Arnold do karate in the garage or take pillowcases, fill them full of bars of soap, and beat each other.

The only thing that could make this video better is if they were able to get the distinctive voices of Sly and Arnold on the deepfake. Especially to hear Schwarzenegger sing “Por Ti Volare” at the Catalina Wine Mixer.

RELATED: ‘Step Brothers’ Originally Had A SeaWorld Scene That Was So Funny That It Made Will Ferrell Cry Laughing

This is likely as close as we’ll get to a Step Brothers sequel. In 2018, John C. Reilly said he would be up for a sequel, but Ferrell revealed that there has only been chit-chat about a potential Step Brothers 2, but the plot sounds fantastic.

“We talked about Step Brothers and then Adam and I got sidetracked with other things,” said Ferrell. “We had a whole story where John (C. Reilly) and I follow our parents to live in a retirement community and try to convince them that we earned the right to retire as well.” It appears that Brennan was so pissed off at his mom that he put her in a home.”

“The sequel thing is so funny because, we decided obviously to go down the road with Anchorman, and we made what I thought was a really great sequel, really funny,” Ferrell said of making sequels. “The entertainment media and fans beg you, and beg you, and beg you for sequels, and then you make it and you definitely have a fraction that’s like, ‘Well, not as good as the first one.’ So I guess it’s a catch-22. It’s a nice catch-22, because people love the movies in the first place.”