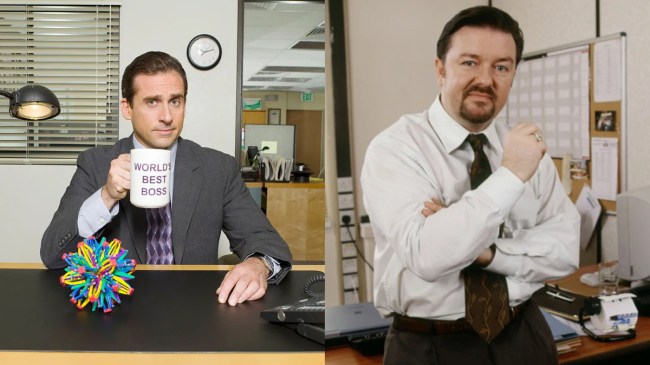 While 60-year-old Steve Carell has starred in dozens of films and TV series over the years — and even earned an Academy Award nomination for Best Actor for his work in 2014’s Foxcatcher — he will forever and always be known as Michael Scott, the role that has defined his career and 21st-century sitcoms.

During a recent appearance on the Smartless podcast — which is hosted by actors Jason Bateman, Will Arnett, and Sean Hayes — Carell (most recently seen starring in Hulu’s The Patient) explained why he’s never seen the original Ricky Gervais-starring version of The Office. Gervais famously co-created the U.K. version alongside Stephen Merchant and starred in the series as David Brent.

“Is that true?” a stunned Bateman asked after Arnett brought up the topic. “You’ve never seen The Office before?”

“Well, I take that back. Just for a frame of reference, I watched maybe three minutes of an episode before I auditioned. And I knew instantly that I couldn’t watch it because he [Gervais] was too good. If I watched anymore, I’d just want to duplicate what he was doing because he was so brilliant.” [via Smartless]

Carell, of course, would go on to create a Michael Scott character that would go on to become one of the most iconic sitcom leads of all time. The role also lifted Carell into Hollywood’s A-list, where he has remained since as both an acclaimed comedic and dramatic actor.

In addition to his recent starring role in FX’s The Patient (which is currently streaming on Hulu), Carell will also appear in Wes Anderson’s Asteroid City in 2023 and John Krasinki’s If alongside Ryan Reynolds in 2024.