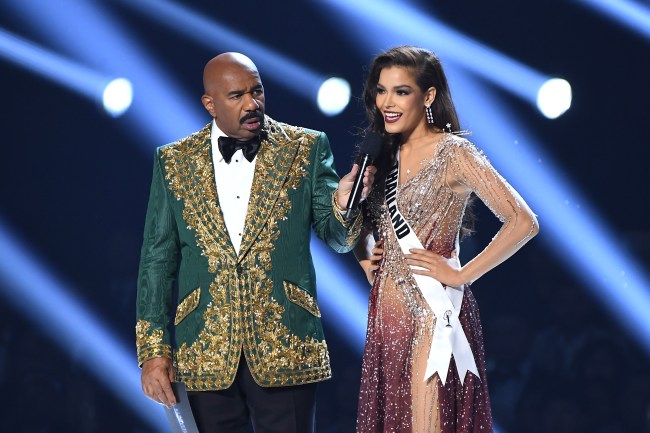 Steve Harvey is a thorny creature. We know this from the now infamous 2017 memo he sent to his employees telling them to leave him the hell alone, in about 250 words. Harvey then bailed on his own show’s wrap party to avoid any superfluous encounters.

Superfluous encounters are not Harvey’s strong suit. Evidence of this can be found in a now re-circulated clip from 2010 in which the comedian makes an appearance CNN’s Face to Face with Fredricka and attempts to dispel the myth that men and women can be platonic friends.

Steve Harvey says guy friends would “slide in that crack” the moment a women allows it pic.twitter.com/OwKVuHet3K

“He’s your friend only because you have made it absolutely clear that nothing else is happening except this friendship we have. We remain your friends in hopes that one day there’ll be a crack in the door, a chink in the armor.”

“And trust and believe that guy that you think is just your buddy, he will slide in that crack the moment he gets the opportunity,” Harvey said.

This, of course, is not the kind of stuff that wins you awards this day-and-age.

Notice here, he says “HE is incapable of that.” Then proceeds to say that “99.9 percent of men think this way.” And this, ladies and gentlemen, is called projecting. Thank you for coming to my TED talk. pic.twitter.com/lASab0ZBGM

Some men really do a disservice to themselves, acting like they have no control over their impulses yet turn around and demand we respect them as leaders. https://t.co/Hpnr8AfgFX

It’s just really funny to me how men will say things like this but then be offended when women assume all men want is sex.

How is that not a safe conclusion when men *loudly* express they can’t fathom a relationship with women outside of sex? https://t.co/XGXn4XSyok

Steve Harvey making up stories about why men and women can’t be just friends: pic.twitter.com/uxxTIvjnIp

Steve Harvey to any female friends when he gets denied be like:
pic.twitter.com/oWbiVGUIHk

Steve Harvey is that weird uncle that stay tryin to give unsolicited advice and calls you hard headed when you don’t listen. pic.twitter.com/sfZu06mPh4

I see Steve Harvey is trending because of comments he made about men being friends with women a few years back. Well, this certainly isn’t a groundbreaking idea.

What makes comedy great is the element of truth in it. The great Chris Rock said it best: 😇pic.twitter.com/EK6qa5g4d1

Steve Harvey getting trended for quoting Billy Crystal in "When Harry Met Sally" isn't one I saw coming https://t.co/PCpT1vd2SE

Steve Harvey when he’s given the opportunity to smash his female friend pic.twitter.com/IJFPBwGlQ0

Steve Harvey looking at the nearest female friend of the day. pic.twitter.com/lqPagoURnr

Steve Harvey when a woman says to him we are friends pic.twitter.com/i92mDZrB4f

What Steve forgot to include here is that he also does not have male friends. He is an equal opportunity employer. Kind of honorable if we’re being honest.