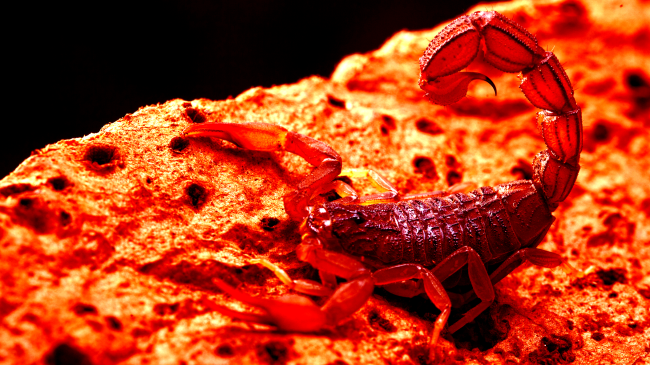 The world is a very scary place. Cockroaches are starting to become immune to insecticides, gigantic centipedes invading people’s homes, mutant rabbits walking around doing handstands, and don’t even get us started on the robots.

Now, in addition to all of that, we’ve got a plague of scorpions wreaking havoc and even killing people. Surprisingly, this latest bit of nightmare fuel doesn’t come to us from the home of all things creepy and terrifying, Australia.

Instead, a massive swarm of deadly scorpions has been terrorizing residents in Aswan, southern Egypt after recent thunderstorms and snowstorms blanketed the area.

The torrential rain, snow, and resulting dust storms, have not only caused power outages and flooding, a massive swarm of scorpions, along with snakes and other animals, are causing hundreds of injuries and even deaths as they are forced from their nests.

According to Sky News…

A spokesman for the health ministry told Al-Ahram news agency that rain had flushed scorpions and snakes out of their hiding places, caused power cuts, and led many lighting columns and trees in the streets to fall.

Hospitals across the region are on high alert, doctors have been recalled from holiday and extra supplies of anti-venom have been distributed.

The governor of Aswan, Ashraf Attia, has urged people to stay at home and avoid places with trees.

Related: Sign Of The Beeocalypse: Bees Are Working Together To Remove Caps From Bottles Of Soda

The particular breed of scorpions that has been causing all of this havoc wasn’t specified, but Egypt is home to the fat-tailed scorpion, which is known to cause several human deaths each year. Black fat-tailed scorpions belongs to the genus Androctonus, which can loosely be translated as “man-killer.”

The BBC reports venom from a black fat-tailed scorpion can kill a human being in under an hour.