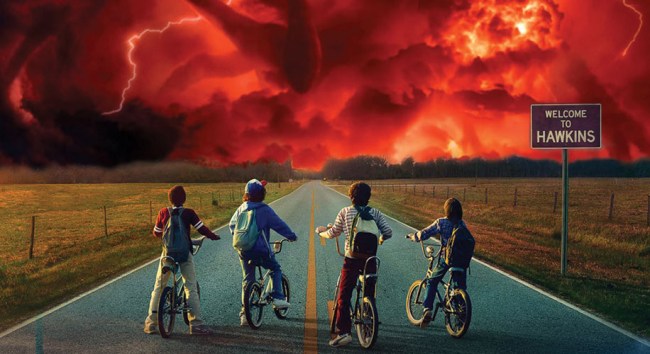 There has been no shortage of drama for the actors and creators of Stranger Things as they gear up for season three. Unfortuntely, it’s all been taking place offscreen rather than on it.

First, we got the bad news that THAT character is coming back next season. You know which one.

Then we learned that season three isn’t coming out until 2019, which completely sucks.

On the plus side, David Harbour has been killing it on social media, and the kids on the show got some enormous raises for season three.

Then there is the whole plagiarism accusation thing that the Duffer Brothers have had to deal with over the past few weeks. Which, if the accuser, Charlie Kessler, gets his way would mean the immediate cancellation of Stranger Things and potentially removing the show’s first two seasons from Netflix. Something a lawyer says is unlikely. Phew!

Amidst all of that, we have learned a few things about what to expect in season three. Stranger Things producer Shawn Levy dropped some tidbits about a “new” evil the gang will be facing, as well as some significant new details about the plot and characters.

We also learned that three rumors floating around about season three have been confirmed to be true. Screen Rant was nice enough to compile those in the video you see below.

If you were desperate to know more about Hopper’s mysterious past, you’ll soon get your wish. And he’s not the only character you’re going to see more of. Billy and Max will be sticking around, in addition to some new characters. And if you were a fan of Lucas’ little sister, Erika, you’ll be glad to know that she will be back with some more dialogue, and some friends of her own. Oh yeah, and of course there will also be all new monsters to threaten the town of Hawkins, and the entire world.

And the last thing for you to chew on today involves the series’ use of Dungeons & Dragons as a plot device.

Last week, artist Jared Flaming posted a couple of photos to Instagram saying that he was helping the prop master of Stranger Things learn more about D&D.

“Doin my part in teaching the prop master for strangers things season 3 about dnd!” wrote Flaming.

“More from the #strangerthings #dnd crash course! Cramming a lot of gaming history into an afternoon before the prop master flies to the shoot. Stoked to see how they work it into season 3,” he wrote.

You’re not the only one Jared. Stranger Things season three can’t get here soon enough.