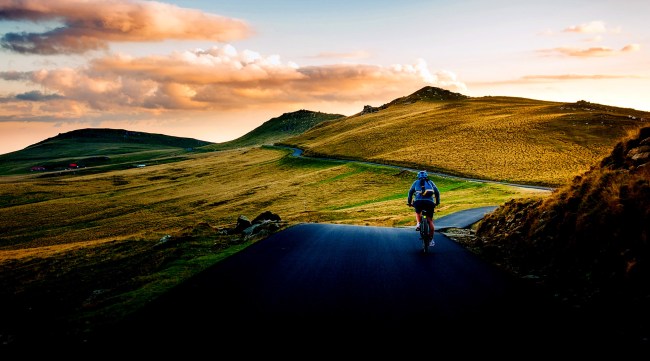 A 20-year-old Greek student at the University of Aberdeen in Scotland named Kleon Papadimitriou biked for 48 days straight to get home after all flights were cancelled due to the ongoing global pandemic.

Papadimitriou says he tried to book flights home to Athens three different times in late March, but each time he did his flight was canceled.

So, rather than just sit around and wait, Kleon did a little research and figured out that he could make the 2,175-mile trip home on a bicycle.

One problem though: he didn’t own a bicycle.

After resolving that one little issue, Papadimitriou set up an app and Instagram account so friends and family (and anyone else who was interested) could track his progress on the monumental trek.

He survived his trip, which involved a sleeping bag, a tent, two trips on a ferry, and multiple tire punctures, by eating bread, peanut butter and sardines along the way.

Every now and then he would contact friends or acquaintances who would offer a bed and a shower.

“As a relatively introverted person, I was forced to kind of get out of my comfort zone in the sense that if I did not do some things, I would not have a place to stay, I would not have water,” he told CNN. “It forced me to kind of have those interactions and reach out.”

Last meal in the Netherlands from earlier today. I never felt more at home on the bike anywhere else! :))

Riding 35 to 75 miles per day, Papadimitriou and his bike made its way through England, the Netherlands, Germany, Austria and Italy before finally finishing at home in Greece.

“It’s just now dawning on me how big of an achievement this was,” Papadimitriou said about his trip. “And I did learn a lot of things about myself, about my limits, about my strengths and my weaknesses. And I’d say I really hope that the trip inspired at least one more person to go out of their comfort zone and try something new, something big.”

He also added, “When you set the bar really high and you attempt to reach a really ambitious goal, whether you achieve it or you don’t, you will have improved. You will learn things about yourself and you will surprise yourself.”