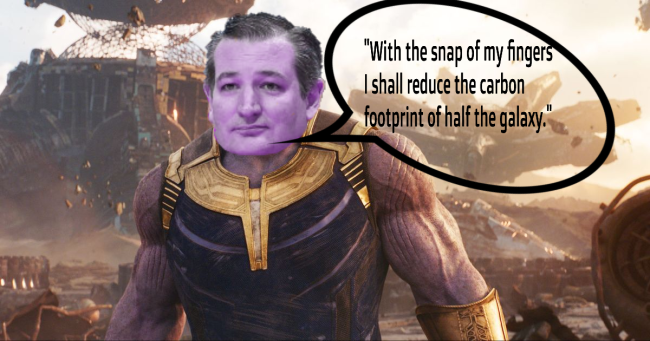 During a recent episode of his Verdict with Ted Cruz podcast (?), the Texas Senator put on his pop culture hat to make a connection between the “Left” and… Avengers: Endgame and Watchmen. That’s right, according to Cruz, rabid environmentalists such as THANOS are so often cast as the bad guys in Hollywood productions because of liberalism, or whatever.

“And actually what is interesting in Endgame is curious. Have you noticed in how many movies how often rabid environmentalists are the bad guys?” Cruz says.

“Whether it’s Thanos or go to Watchmen. Where the view of the left is people are a disease. They buy into the Malthusian line that there are too many people in the world, that people are bad and everything would be better if we had fewer people. I mean, Thanos wanted to eliminate 50 percent of the life forms of the universe with one finger snapping.”

Sen Ted Cruz: "Have you noticed in how many movies how often rabid environmentalists are the bad guys? Whether it's Thanos or go to 'Watchmen.' The view of the Left is people are a disease" pic.twitter.com/fthdBWVSWv

First of all, we’re just gonna have to completely ignore the fact that Cruz has quite clearly never seen nor read Watchmen, as his description of the famed Alan Moore tale bears absolutely no resemblance to the actual story.  If this entertainment analogy were an at-bat, Cruz would already be facing an 0-2 count.

Now, back to Thanos: while I’m neither a lawmaker nor a purple intergalactic titan, I can confidently surmise that Thanos’ goal had nothing to do with the air quality in the cosmos or the carbon footprint of Tony Stark and more to do with his blinding desperation to be considered a god.

My man’s thesis was that the universe was overcrowded and that if life is left unchecked, it will cease to exist, but instead of just creating more space and planets to sustain said growing life like any rationally sane person would, Thanos instead opts for the whole “genocide” route, which seems far less prudent from my point of view. Had Thanos not considered how brutal life would be after seeing your Grandma Ginny vaporize out of her rocking chair?

As the infamously viral tweet about ISIS once read, you do not, under any circumstances, “gotta hand it to them”, and that ideology certainly applies to the mass-murdering Thanos. If you’ve got to wipe out half of all living creatures to make your Green Purple New Deal viable, it probably isn’t all that admirable of a strategy to begin with.