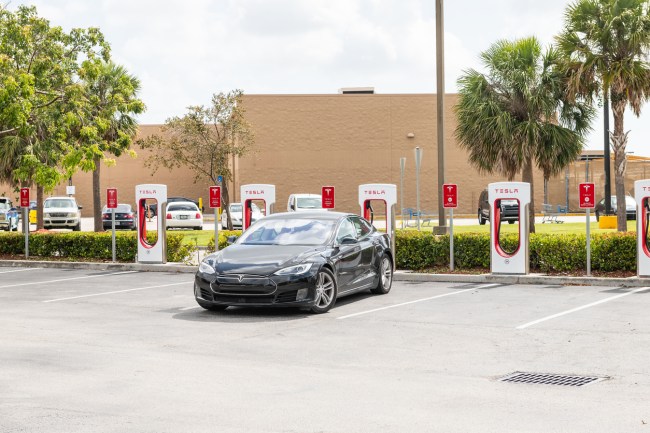 A Tesla police cruiser ran out of juice during a high-speed chase and the suspect was able to escape. Why can’t the police cars chasing me be electric cars?

A cop with the Fremont Police Department was pursuing a suspect in California last Friday when their Tesla patrol car ran out of energy. Right smack dab in the middle of the police pursuit of a “felony vehicle” at speeds of 120 miles per hour, the Tesla cop car ran out of juice in the San Francisco Bay Area.

The Tesla cop was forced to radio into headquarters for backup after his electric vehicle ran out of power. This wouldn’t happen to a Crown Vic.

“I am down to six miles of battery on the Tesla so I may lose it here in a sec,” the police officer told headquarters in a radio transmission. “If someone else is able, can they maneuver into the number one spot?”

The suspect was able to speed away from the dying automobile. The criminal’s car was later found in bushes in San Jose. The suspect escaped and has yet to be apprehended. So, what you’re saying is that the suspect was not… charged.

A spokesperson for the Fremont Police Department said that the Tesla patrol cars are part of a pilot program of using electric vehicles in the police force that has been in effect for six months.

“We have no written policy regarding gas or charging, but the general guideline is that it should at least be half full at the beginning of the shift, which this car was,” the spokesperson said. “The Tesla wasn’t fully charged at the beginning of the shift. This unfortunately happens from time to time even in our vehicles that run on gas, if they aren’t re-fueled at the end of a shift.”

You could argue that this could happen to any gas-powered automobile, but then you could also argue that the gas-powered vehicle could have been refilled in three minutes at the end of a shift and maybe the Model S wasn’t fully charged because they didn’t have 10 hours.