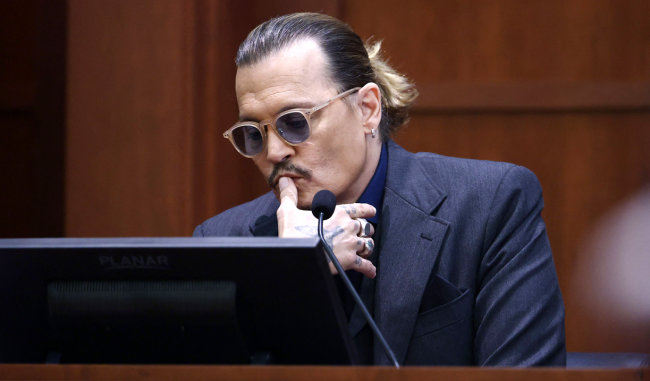 Mark day 7 of the Johnny Depp versus Amber Heard trial as the day the $100 million trial went completely off the rails.

If you thought Johnny Depp’s friend testifying that the actor said he hoped Amber Heard’s “rotting corpse is decomposing” in the “trunk of a Honda Civic” was wild, you ain’t heard nothing yet.

We knew this was going to happen. Almost the exact same trial already took place over in England back in 2020 and it was complete madness then as well.

On day 7 of this trial, however, with Johnny Depp on the stand, things got somehow even more weird.

Related: Johnny Depp Claims He’s Never Seen The Original ‘Pirates’ Movie And That No Amount Of Money Could Get Him To Make Another

When Depp was asked if he drank whiskey in the morning while shooting The Lone Ranger, he answered, “Isn’t happy hour anytime?”

Johnny Depp says it's unlikely he kept cocaine in this metal box with "Property of JD" on it, depicted next to lines of cocaine.

"When you put it in a box like that, chances are very good you’ll leave a trail of a long line of cocaine behind you walking down the street," pic.twitter.com/9ZU0MEwD7F

When Depp was shown a photo of marijuana in his recording studio, Amber Heard’s lawyer asked him, “This is a photo of 4 pretty huge bags of marijuana, yes?” His response? “Yes sir, that’s a lot of marijuana.”

Amber Heard lawyer: "You've trashed hotel rooms simply because you had a bad couple of days and an unpleasant time, right?"

Johnny Depp: "I have assaulted a couch or two, yes sir."

The topper for the day, however, is when Heard’s lawyer showed the court text messages from Depp to actor Paul Bettany talking about how he wanted to do some very bad things to Amber’s corpse. (Johnny Depp has repeatedly mentioned talking about doing things to corpses in his lawsuits against Heard.)

In the messages to Bettany, Depp wrote, “Let’s burn Amber!!!”

Bettany replied, “Having thought it through I don’t think we should burn Amber – she’s delightful company and easy on the eye, plus I’m not sure she’s a witch. We could of course try the English course of action in these predicaments – we do a drowning test. Thoughts? N.B I have a pool.”

To which Depp answered, “Let’s drown her before we burn her!!! I will f— her burnt corpse afterwards to make sure she is dead…”

“Did I read that right?” Heard’s attorney asked Depp.

“You certainly did,” he replied.

“You wrote that about the woman who would later become your wife?” the lawyer asked.

In other texts presented by Heard’s lawyer, Depp referred to her as a idiot cow, an ugly c–t, a worthless hooker, and a filthy wh-re.

In earlier testimony, Depp apologized to the jury for the language he used in the texts, saying “in the heat of the pain I was feeling, I went to dark places.”

Watch day 7 of the trial in which Depp is suing Heard for $50 million and Heard is counter-suing Depp for $100 million below.

Related: Johnny Depp’s Doctor Testifies About Actor’s Drug Use, Cutting Off His Part Of His Finger