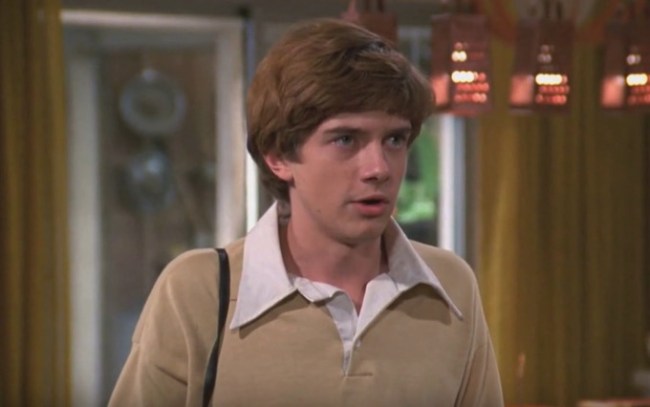 I’m all for a great conspiracy theory when it comes to disrupting people’s view of a beloved TV Sit-Com. A great example of this would be the insane amount of time people have spent on the Internet trying to prove that Toby Flenderson on The Office was actually the infamous ‘Scranton Strangler’.

If you’ve never seen that Scranton Strangler theory you can check it out here, but that’s not what we’re here to talk about today, we’re here to discuss Eric Forman played by Topher Grace on That 70’s Show. This TV show was a launching pad for a lot of famous actors, most notably Mila Kunis and Ashton Kutcher.

That 70’s Show ran from 1998 to 2006 and it was a huge hit with older millennials like myself. Most of the show took place in the Forman’s basement where the gang would get together and smoke a ton of weed, get baked, and have roundtable discussions while trying to avoid the ire of Eric Forman’s dad, Red.

As far as characters on the show went, Eric Forman was kind of a wet blanket. Topher Grace left the show after season 7 and the writers wrote him off as going to Africa. He later returned for the series finale but this fan theory suggests that all of that was in our minds. It purports that Eric Forman was actually in a coma from mid-way through Season 4 and he officially died in the finale.

Here’s a video that lays out this insane fan theory, and I’ve found a longer explanation which I’ve shared below from a Reddit thread that’s a few years old:

I’m convinced. I know you are too. But if you need a little push over the edge, here’s the text from a 4-year-old Reddit thread which is the first instance I can find of this fan theory hitting the Internet:

Background: T7S is known for having one of the worst, inconsistent timelines in all sitcoms. However, rewatching it, I realized that in the first half of the series, the timeline really isn’t all that bad. There are 13 episodes in 1976, and mid-season one until near the end of season three is in 1977 (containing one Halloween episode and one Christmas episode).
It’s after it turns to 1978 that things get hairy, with the year lasting until season six, with several holiday episodes repeated, and birthdays not making sense. 1979 lasts until the final episode (season eight).

Proof: In the episode Tornado Prom (4×15), it centers around Eric and the gang going to the Snow Prom. Eric forgets to pick up Donna at the radio station, and ventures out to get her, without hearing that a “Code Red” tornado warning has been issued for the town. On his drive, the tornado is even shown behind the Vista Cruiser. A side story takes place in the basement with Kitty and Red. Nothing about this is important EXCEPT their last scene, where they find out the tornado warning has been lifted. If you listen, after the announcer mentions it’s been lifted, you’ll hear this:

“And updating our top story, a local teen is in critical condition….”

Local teen in critical condition, eh? Could it be the one and only Eric Forman played by Topher Grace? You’re damn right it could be. Read on…

This theory thinks that teen is Eric. The tornado is shown going REALLY close to his car. None of his friends would suspect anything was wrong until the storm died down. Donna was at the radio station, assuming he didn’t come because of the storm (she’s surprised he turns up at all in the episode), and everyone else was at the prom, thinking he was safe with Donna. With the tornado warning in effect, if the Formans received a phone call from the police or hospital, it’s possible they didn’t hear it. The nearest phone is in the kitchen upstairs, and their lines could easily be down anyway.

I think the announcement is the first the Formans have heard about the situation. Eric is in a coma from injuries sustained by the tornado, and the reason the timeline beyond that episode is so messed up is that it’s Eric’s mind filling in the blanks. His mind tries to resolve any unresolved conflicts, and possibly forms new ideas (like new couples or careers) by his friends and family talking to him. Maybe some of those things actually did happen, but just not in the same timeline (or same situations) that he imagined.

In the last season, his brain decides that it’s time to test what his loved ones’ lives would be like without him. He sees that everyone would eventually be okay and move on, and he finally lets go. Him returning in the last minutes of the last episode is most likely his mind’s way of saying goodbye to his loved ones. The significance of finally leaving the 70’s is Eric’s mind finally being ready to let go.

I don’t know what’s left here to convince you. Just let this conspiracy theory take hold. You know you want to believe. I’m a believer. Join me.

While you ponder Eric Forman’s mortality, check out this ‘Best Of’ compilation from his moments on the show.