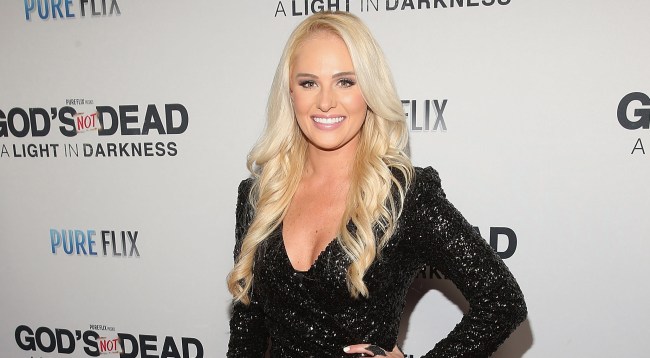 It must be nice to be able to be like The Game and absolutely not give a single f**k what you say. From claiming that he used to make Frosted Flakes for Kylie Jenner “when she woke up” to bragging (graphically) how he hooked up with Kim Kardashian, Mr. Jayceon Taylor just DGAF.

So when he saw Cardi B feuding with right wing talking head Tomi Lahren on Twitter over 21 Savage being arrested by ICE and possibly being deported, he decided to enter the fray.

Cardi and Tomi’s feud began when the rapper tweeted this…

Then became a feud when, for some reason, Lahren weighed in with this tweet…

Looks like @iamcardib is the latest genius political mind to endorse the Democrats. HA! Keep it up, guys! #MAGA2020

Leave me alone I will dog walk you . https://t.co/FjqIzpUbvp

It didn’t end there, of course.

I’m sure you would. Still doesn’t make your political rambling any less moronic. #BuildthatWall https://t.co/pcFJ6jrgqv

You’re so blinded with racism that you don’t even realize the decisions the president you root for is destroying the country you claim to love so much .You are a perfect example on no matter how educated or smart you think you are you still a SHEEP! https://t.co/khRpoOt16B

Which led to Alexandria Ocasio-Cortez getting involved…

Aren’t you the same girl who whines about Trump inciting violence? Now you applaud it because it’s against a female conservative you disagree with politically? Convenient. P.S. I do fully acknowledge @iamcardib is smarter than YOU. https://t.co/S066IdLMB6

Fast forward a couple of weeks and Lahren posted a tweet mocking 21 Savage being arrested using his lyrics from “Bank Account.”

Cardi B still wasn’t having it.

Don’t make me get my leash https://t.co/ErQ2RhzDeg

And NOW, The Game has decided to join in on the fun, making a very thinly-veiled and very graphic reference to Lahren being, umm, popular with the UNLV Runnin’ Rebels when she attended the school.

Just in case he decides to delete his post (which I very highly doubt), here’s a censored version of what he said.

This c** gargling, microwaved carrot skinned, 90 year old white man body havin slut @tomilahren always got sumn slick to say. @21savage gettin detained by ICE is not funny nor anything for ya middle of the mall clip in wearin’ hoe ass to be joking about. You the same dumb broad that was singin the lyrics to his song not along ago… now using his situation & the culture deep down you love so much for content on ya bum ass twitter page etc…. Then ya dumb bird ass gone say “your ancestors” discovered America ?!?!? Obviously all that black athlete s***n you swallowed at UNLV is starting to seep into that cracked skull of yours !!! Cut the shenanigans grandma p***y… we 👀 you !!! Here’s some advice: stay out the tanning salon, you’re starting to look like a sick tangerine 🤟🏾 #FreeDaReal #21 [Someone please recommend a good burn center for her] #ThanksInAdvance

The main problem I see with The Game responding like that is that Lahren probably loves the fact that he’s giving her more attention. Because she too DGAF.