‘The Irishman’ Knows What We Want And Gives It To Us 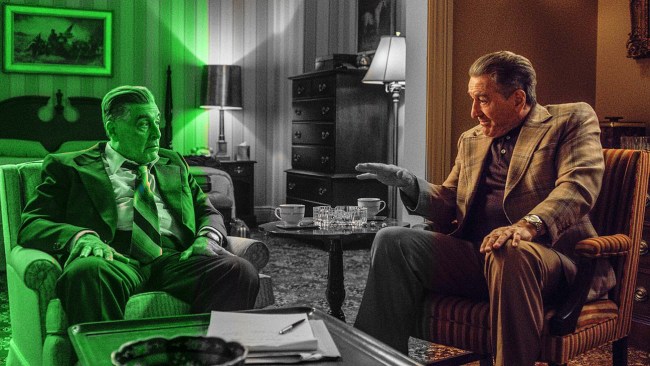 When people ask me how my career as a writer came to be, I already know the answer I’m going to give before the question even finishes rolling off their tongue: my mother’s love for Goodfellas.

Now, to be clear, my Mom is no arthouse, indie film snob — in fact, far from it, as she spent her career working with numbers as a Vice President at Citibank and as a math teacher at Peauqunock Middle School. Her native tongue is numbers. But she’s simply story lover: she loves movies, albeit largely the mainstream ones, and she loves to read. And thus, by the time I was about 11 or 12ish years old, she made sure that I’d seen Goodfellas. Actually, both that and Pulp Fiction.

While I was likely far too young to fully appreciate either of those films at the time, they had profound impacts on the way my life would unfold, as my love of movies ultimately led me to pursue a career in writing about them.

To this day, despite it being over 15 years since it happened, I still remember the first time I saw Tommy DeVito repeatedly plunge an almost comically large steak knife into the chest of a helpless trunk-bound beaten-to-a-pulp Billy Batts.

As Pesci’s wild eyes — illuminated by the blood-red glow of his ’61 Chevy Impala’s taillights — took a man’s life in the most violent fashion I’d ever seen before, I knew I was seeing something different — this is a different type of movie.

And after seeing Goodfellas, my world was never the same. I couldn’t shake the notion that’s what movies should be. Narrations, tracking shots, classic rock, freeze frames, slick-talking and sharply dressed bad guys who you root for as if they were good guys, Martin Scorsese shaped my — and many others — view of entertainment, and therefore, shaped my life.

From that point forward, I wanted all my favorite movies to look, sound, smell, and feel like Goodfellas — the slickness of the Copacabana shot, the smell of the cigarette smoke in the backroom poker game, the tone of Bob De Niro asking Frankie Carbone and Johnny Roastbeef what the hell is the matter with them, the violence of Henry Hill obliterating his handsy neighbor’s nose to pieces.

And The Irishman knows that. The Irishman knows the lore that comes with casting Robert De Niro and Al Pacino opposite of each other and is aware of the awe that digging Joe Pesci out of retirement inspires. It knows that it’s speaking to an audience who likely grew up on these very gangster films starring these very actors helmed by this very director. It knows that it’s impossible to see Frank Sheeran without thinking of Jimmy Conway.

Similar to the once-in-a-lifetime feel of seeing Leonardo DiCaprio and Brad Pitt share the screen in Once Upon A Time In Hollywood, The Irishman succeeds most when viewing it as less of a film and more of a spectacle. Don’t worry about the runtime or the physical stiffness of the actors supposedly playing men in their forties or the lack of pulse-racing plots. Embrace that, for perhaps the final time, we get to enjoy De Niro, Pacino, Pesci, Keitel — all directed by arguably the most influential American director in history — just sit around and do that real Italian shit.

Simply appreciate the fact that The Irishman, in its most simple form, is the culmination of decades of filmmaking, bringing together some of the best that the medium of cinema has ever seen, both in front of and behind the camera.

The Irishman knows what we want because it’s from all the people who defined what we want in the first place. Who are we to disagree?