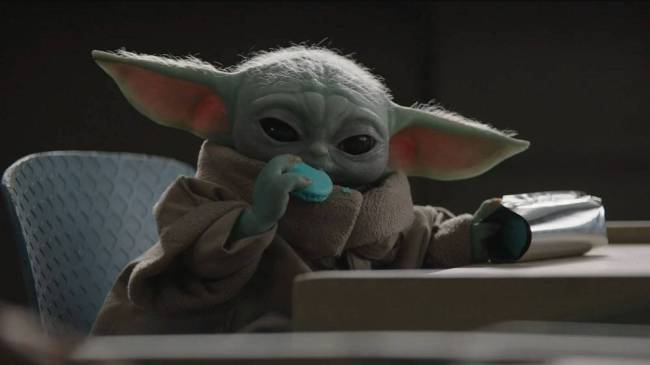 The Mandalorian is fun. While my podcast co-host and I often arbitrarily complain that we’d prefer if the series committed to its more serialized elements, the fact is that The Mandalorian doesn’t need to be because it’s already achieving its primary goal of being an enjoyable Star Wars tale for fans all across the spectrum. And you know what, good for them: the Star Wars sequel trilogy was a disaster and The Mandalorian represents the best product from the universe since Rogue One.

Still, all that series, The Mandalorian inherently remains a Disney product, which is — as Christopher Nolan so eloquently put it — an “engine of commerce”. It is designed to do nothing more than make money. That idea is perhaps best summarized by the recently released Nevarro Nummies Macarons on the Williams Sonoma website, complete with Mandalorian branding and all! And for the price of just $49.95 ($61 with shipping), 12 of these macrons — yes, only 12 — can be yours! Wow! Very cool!

“Inspired by a sweet moment when a young Nevarro student debated sharing his treats with the Child, 21st-century artisans in California have created these ethereal French-style almond macarons capturing the essence of this scene with Nevarro Nummies™. For authentic galactic flavor, each exquisite treat is artfully hand-piped with a rich, creamy vanilla filling,” says the website’s official description.

You can now purchase the blue macarons from the latest episode of #TheMandalorian for $49.95

RELATED: So, What’s Moff Gideon Up To On ‘The Mandalorian’?

As for who exactly Disney and Williams Sonoma are targeting with this product, I have no idea, but its very existence suggests the pair of these publicly traded companies think they can make a profit off slinging blue cookies for five-bucks a pop. That’s what they think of us.