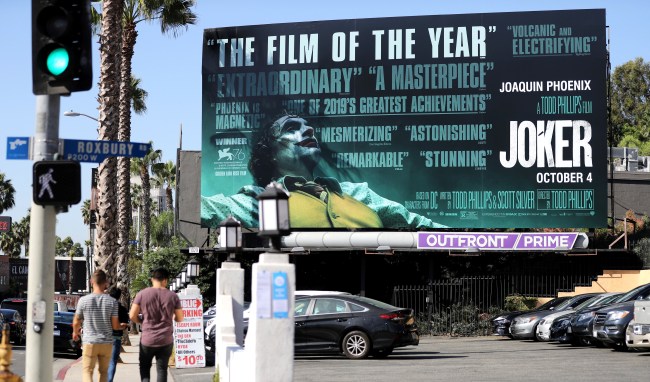 As Joker opened up in theaters nationwide, one cinema in southern California showing the film was forced to close due to a credible threat.

Meanwhile, star of the film, Joaquin Phoenix, and Joker director Todd Phillips, crashed a screening of the film in New York City.

The premiere of Joker across the nation has sparked a hotbed of controversy as the U.S. Military, the FBI, and numerous local law enforcement agencies have been preparing for the potential of violence similar to that seen at a showing of The Dark Knight Rises in Aurora, Colorado in 2012.

In advance of the film’s opening, the U.S. Military warned troops about the potential for a mass shooter at screenings of Joker. The Department of the Army and the FBI even issued internal warnings regarding potential mass shootings. And screenings in theaters across NYC will be getting a special police presence.

Phoenix, Phillips, and the studio the produced Joker, Warner Bros., have all responded, each in their own way, to the concerns that have been raised.

Thursday night, a Huntington Beach, California theater showing Joker was forced to close its doors because police there received what they believed to be a credible threat, according to the Los Angeles Times.

Officers were sent about 5 p.m. to the Century Huntington Beach and XD theater in the Bella Terra shopping center at 7777 Edinger Ave. The theater stopped showing all films scheduled to run after 4:45 p.m., according to a schedule posted on its website.

Police did not describe the nature of the threat or how it was reported. Showings of the film are scheduled to resume on Friday, and authorities say they will maintain a presence in the area around the theater throughout the weekend.

The FBI informed ABC News that it is monitoring threats on online platforms related to Joker.

“While many Incels do not engage in violence, some within the community encourage or commit violent acts as retribution for perceived societal wrongdoing against them,” read a joint intelligence bulletin obtained by ABC News. “Some Incel attackers have claimed inspiration from previous mass shooters.”

At least one AMC theater has gone as far as to post a message on the door reminding movie-goers that Joker is not your typical superhero film, which follows Alamo Drafthouse warning parents who were thinking about taking their kids to see the movie.

They had to slap this note on the door at the AMC in Freehold. pic.twitter.com/HofSGvlaVm

Meanwhile, as law enforcement around the nation is on high alert, Phoenix and Phillips showed up unannounced at a screening of Joker at a New York City movie theater on Thursday night.

The fact that Joaquin Phoenix surprised us at the end of #joker was top 5 life experiences so far #joker2019 pic.twitter.com/J3RH1GvTEH

So far, with the widest release ever for the month of October (4,374 theaters), Deadline reports Joker is on track to surpass $90 million for its opening weekend, and grossed $13.3 million with its Thursday previews, beating the October box office preview record previously held by Venom and outpacing other R-rated films’ preview nights such as Deadpool, It Chapter Two, The Hangover 2 and Logan.