Tiny Thumb-Sized Bat Sets New Record With 1,200 Mile Flight, Then Gets Killed By A House Cat 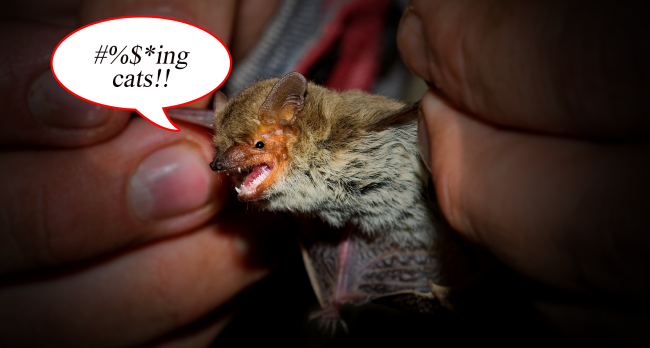 If you need more proofs that dogs are way better than cats (and you really shouldn’t), here’s a little tale for you.

A tiny little thumb-sized bat recently made a record-breaking flight, traveling 1,254 miles (2,018 kilometers) from the United Kingdom all the way to Russia.

“This is a remarkable journey and the longest one we know of any bat from Britain across Europe. What an Olympian!” said Lisa Worledge, the head of conservation services at the Bat Conservation Trust.

Resident Svetlana Lapina discovered the female Nathusius’ pipistrelle bat in her small Russian village of Molgino in the Pskov region. She noticed its arm was ringed, with London Zoo written on it. Remarkably, the little bat had been ringed back in 2016 at Bedfont Lakes Country Park near Heathrow in London by bat recorder Brian Briggs

“Her journey is an exciting scientific finding and another piece in the puzzle of bat migration. The movements of Nathusius’ pipistrelles around the UK and between the UK and the continent remain largely mysterious,” Worledge continued.

“The movements of Nathusius’ pipistrelles around the UK and between the UK and the continent remain largely mysterious. Projects pioneered by citizen scientists have helped to shed light on the migration pattern of these winged wonders. Thanks to the hard work of dedicated volunteers and researchers, we are beginning to understand the needs of this species and how to conserve them.”

Sadly, according to LiveScience, “The female Nathusius’ pipistrelle (Pipistrellus nathusii), which weighed just under 0.3 ounces (8 grams), was found injured in the village of Molgino in western Russia. It was taken to a local bat sanctuary but later died from its injuries.”

No, it wasn’t the grueling 1,254 mile flight that killed that teeny, tiny record-breaking bat. It was … a house cat.

Of course it was a cat! They serve no other purpose other than to torment any and all creatures that dares to breathe the same air that they do.

The poor little bat not only set a record for flying farther than any other bat from the United Kingdom, it almost broke the all-time record for longest migration flight, 1,381 miles (2,223 km), set by a bat that flew from Latvia to Spain in 2019.

How the talented little bat fell into the paws of an evil cat is still a mystery, however. Perhaps scientists need to start keeping better track of the important creatures they are studying.