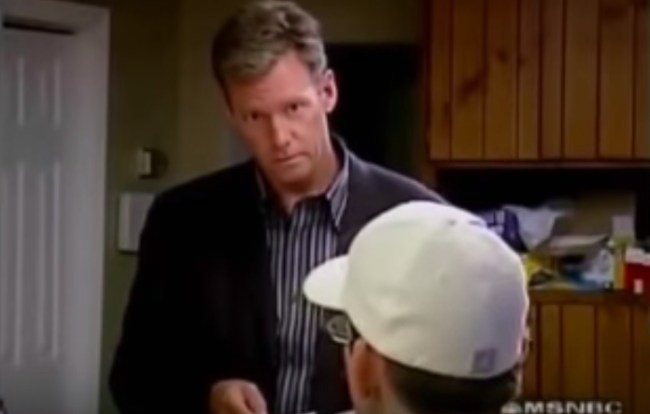 Pedophiles in prisons spanning from Maine to California must be collectively rejoicing today after news broke that the man who trapped them into traveling cross country in a 18-wheeler with a box of condoms, a rope, and a box of Crayola crayons for some reason, has been arrested.

The 59-year-old television journalist was arrested by Connecticut PD and charged with larceny for bouncing multiple checks to a vendor.

Chris Hansen from 'To Catch a Predator" arrested in CT https://t.co/glyvHj9G2q pic.twitter.com/Obcwc967h8

TMZ has the scoop:

The former host of “To Catch a Predator” was arrested Monday in Stamford for larceny. Cops say he failed to pay a local vendor nearly $13,000 for stuff he’d purchased in 2017 … and allegedly gave the guy the runaround with 2 bounced checks.

According to Stamford PD, Chris bought 355 mugs, 288 t-shirts and 650 vinyl decals from a mom-and-pop shop in town for marketing events he planned to attend. The owner says the goods were delivered, but Chris bailed on his $12,998.05 tab.

Chris then bounced a second check, and begged for more time. The owner claims Chris sent emails saying he was selling his boat to come up with the cash, but a check — a good one — never came … and a warrant was issued for Chris’ arrest.

He turned himself in Monday, and was booked and released from jail.

I have no idea how this went down, but I choose to believe it happened like this.

Connecticut PD Amber Alert that a child diddler is in the area.

Hansen changes out of his t-shirt and sweatpants and puts on the smuggest outfit in his closet, a long-sleeve polo and some country club khakis. This is the equivalent to a batsuit, the only outfit that allows him to sniff out America’s biggest dirtbags.

Hansen follows the scent of dip spit, latex and desperation to a small two-bedroom ranch in Stamford. A beat up pickup truck is parked in the driveway with a bumper stick plastered across the back that reads: ‘Pedophile On Board.’

The door to the house is wide open, allowing for the sounds of Blues Clues and a grown man who seemingly has laryngitic to waft through the air. The man can be heard asking for a tickle fight.

Hansen enters the house and pompously lights up a cigarette. This is an open-and-shut case and he knows it. He wants to let the drama reach its peak so he goes to the bathroom to take a shit. That damn cigarette does it every time.

He exits the bathroom without washing his hands only to find the “Cat Perv” who Hansen busted years ago for trying to seduce a feline sitting at the kitchen table smoking a cigarette he stole from Hansen. The Cat Perv is wearing just a towel.

“Have a seat right over there, Mr. Hansen,” the Cat Perv says.

Hansen, panicking, tries to dash for the door, but before he can reach it, a mug, a vinyl decal and a check fall out of his pocket and bounce off the floor.

The Cat Perv takes a long drag of his cigarette.

“Really?” Hansen responds, hoping the Cat Perv has forgiven him for sending him to prison for a decade and publicly humiliating him on national television.

Hansen sprints out the door, his pressed khakis ripping at the seam. He is about to hop into his Prius until an FBI agent unnecessarily dressed as a pine tree cleans his clock like Office Linebacker Terry Tate.

He is thrown in the back of the cop car while President Trump puts the Presidential Medal of Freedom around Cat Perv’s neck for his heroic acts in catching a criminal. Justice has been served.

What a difference a few years makes, AMIRIGHT.