ATTN: MacKenzie Bezos, Todd Gurley Wants You To Know He Can Be Your Rebound And The Entire Internet Supports It 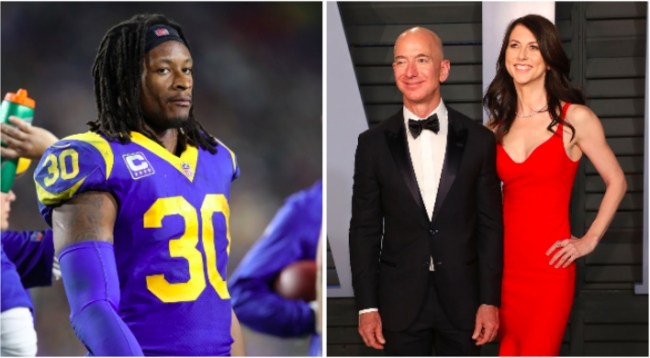 Last night, we went to bed with the newfound knowledge that Amazon founder Jeff Bezos and his wife MacKenzie were splitting after 25 years of marriage. Bezos posted your customary “We have no #ReGreTz and will remain #FrIeNdz” note to social media, and it convinced me this was the classic case of a gradual growing apart.

But anyone who’s watched a Lifetime movie knows that everything is not always what it seems.

Today, Page Six reported that Bezos had been slapping skins with Lauren Sanchez, his neighbor and the estranged wife of Hollywood mega-agent, Patrick Whitesell (Sanchez was also once married to NFL legend Tony Gonzalez, who she has a child with).

In any event, whatever mourning MacKenzie is suffering through now, her gigantic divorce settlement should help permanently numb the pain.

The 48-year-old novelist would become the richest woman in the world if she were to receive half of Bezos’ fortune, around $68 billion. It’s highly unlikely the pair hadn’t etched up some sort of prenuptial agreement, but if not, an equal split could be probable. Under Washington state law, in the absence of a prenup, property acquired during a marriage is usually equally divided in the event of a divorce, claims Carol Bailey, managing partner at Integrative Family Law in Seattle.

One man who is an expert at hitting holes the quickest is Los Angeles Rams star running back, Todd Gurley. Evidently, Gurley isn’t insecure about the female being the bread winner in the relationship, as he immediately shot up a MacKenzie Tuttle smoke signal.

Gurley’s tweet birthed several reactions that made me snicker to myself. I hope they bring a smile to your face as well. you deserve it, brotha.

Amazon CEO, jeff bezos, and wife splitting up after 25 years. the divorce will be delivered in 5 to 8 business days if they choose the free shipping option.

If you pull this off finish my adoption papers please dad

When they say you’re only with her for the money 😂 pic.twitter.com/e80H7w8GXP

MacKenzie, if you’re reading this, I can’t think of a better way to get back at Jeff than to show up to Sunday’s Rams/Cowboys game with a Gurley jersey.

If Jeff is jealous, I’m pretty sure he won’t let Todd know it. If he wants to live, of course…