Watch ‘Venom’ Star Tom Hardy Take Tough Questions From Kids Like ‘How Did You Get In The TV?’ 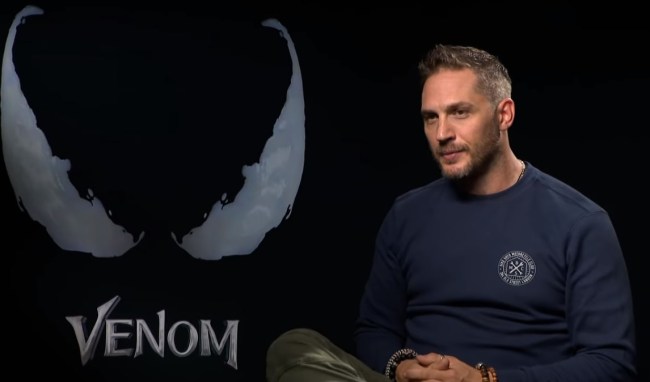 Tom Hardy is currently on a press tour promoting Venom. That’s the dark R-rated movie where Hardy plays the role of a symbiote, an extraterrestrial destructive parasite that indiscriminately kills at will. What a perfect opportunity to have little kids ask Tom Hardy some important questions.

In an interview with Alice & Devon on BBC Radio 1, lil British children asked the Hollywood star several hard-hitting queries about a myriad of topics. “How did you get in the TV?” a child asks and Hardy explains that he crawled into the TV through a little door in the back of the television. “Inside there, there are various colleges — it’s a bit like Hogwarts, but different,” Hardy said. “And there’s an acting school in there as well. After a period of time you graduate, and eventually you appear, when they let you.” Please don’t attempt to crawl into your TV.

One youngster asks Hardy, “Do you like goldfish more than humans?” The actor responds with a very philosophical answer of, “All sentient beings are important so I don’t think you can love any sentient being more than another. We can see ourselves in all living beings. One must care about all living things and approach them with love. Unless, of course, it attacks you in which case, lovingly, shoo it off with a big stick.”

We are #Venom in full force today at the Los Angeles Press Day. Click through to see more: https://t.co/LzAIul8HDz pic.twitter.com/82nV4OHyPi

When asked “What snack would you be?” Hardy replies, “It wouldn’t be meaty… I’m too, sort of, sinewy, I guess I’d be a bag of twiglets.” What the fuck is a “bag of twiglets?”

Tom Hardy skirts the “who’s your favorite Disney princess” question. What’s up with that?

Hardy fielded some softball questions, but then he got hit with a doozy. An 11-year-old asked Hardy, “What’s the naughtiest thing you’ve done?” Hardy was unable to provide a PG-rated answer and suggested that she Google the answer when she was at the appropriate age.