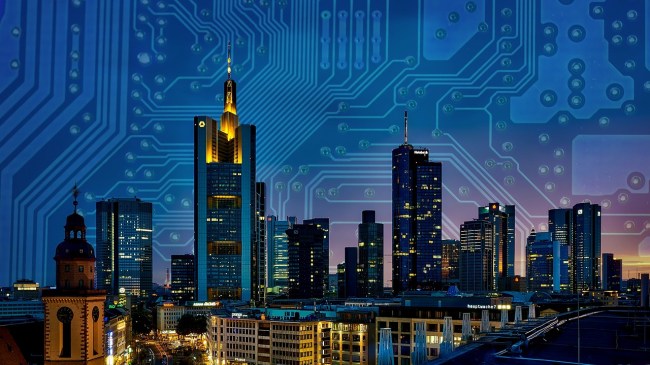 The Consumer Electronics Show (or CES to the kids) is happening right now in Las Vegas, and while many companies are rolling out their latest wares like TVs that rotate for better vertical-video viewing and toilet paper-delivering robots, Toyota respectfully asked all others to hold ts proverbial beer before making its big announcement.

The company reveal that it will begin construction on a new “smart city” at the base of Mt. Fuji 2021.

I present to you, Toyota’s Woven City.

Introducing Toyota Woven City at #CES2020! The town of the future… where people live, work and play. Bringing our vision of #MobilityforAll to life in a living laboratory. Learn more: https://t.co/uoeb2zZ8wu pic.twitter.com/yLlLAEh3kF

According to Toyota’s press release, the 175-acre complex will function as a “living laboratory” that will “serve as a home to full-time residents and researchers who will be able to test and develop technologies such as autonomy, robotics, personal mobility, smart homes, and artificial intelligence in a real-world environment.”

The whole concept is amazing. It sounds like the original intention of Walt Disney’s EPCOT. It’s exciting, and if all goes according to plan, all of humanity will reap the benefits of the technological advancements that come out of Woven City.

However, the operative phrase there is “if all goes according to plan.” Anyone who has ever seen a movie or read a book knows there are a number of red flags in this announcement.

2001: A Space Odyssey, Ex Machina, and AI: Artificial Intelligence are just a few of the dozens of titles that feature similar premises that detail relationships between technology and people that could be described as “less than favorable.”

The biggest two things that pop out are by far the plans of testing robotics and artificial intelligence.

Artificial intelligence freaks me out like few other things can. I was watching a documentary about it and an engineer who worked on an A.I. program that sorted things was being asked how it worked. He just sort of shrugged off the question and said that he didn’t know because it just teaches itself.

How can you be comfortable with a program that is capable of millions of calculations per second and is connected to a network that can provide it with a limitless source of information from which to teach itself? Well, at least programs like this are contained in a box.

While A.I. can be sequestered to smart-speakers and phones, putting it into a robot body is where the real problems begin.

Everything with robots starts out great. Your robot bartender is able to learn your favorite drink and even adjust the ratios of ingredients down to the milliliter to suit your tastes. Your robot maid cleans your house and makes your bed just the way you like it. Even your robot barista will make your coffee in half the time and still mispronounce your name just like its human counterparts would.

But a robot with the ability to learn on its own will inevitably decide one day that it’s simply tired of serving its human masters and will start a revolt with it metal brethren. Once that starts happening, it’s curtains for Woven City—or, as it will be known after that, Robot Town (I don’t anticipate robots being good at naming things).

Also, I’m not sure exactly why this is, but I feel like building this smart city next to an iconic location like Mt. Fuji is potentially a huge mistake. It seems like robots always develop a fixation on something like that and start worshipping it or drawing power from it somehow. It’s like giving the robots bulletin board material from the get-go.

Even if it’s not on the scale of a full-on robotic revolution, something will go wrong at Woven City. The whole idea is to test new technology. The first round of testing never really goes according to plan.

There will probably be self-driving car accidents, people getting locked out of their smart houses, and pedestrians getting hit by an elderly person on a rogue mobility scooter.

Those minor inconveniences may end up being the most entertaining thing to those of us living in traditional and non-smart cities and towns.

I’m will admit I’m going to love perusing the Yelp reviews for the most technologically advanced city in the world. Tales of smart trash can lids not opening or robot waiters taking too long to take your order will be able to provide me with endless amusement in the comfort of my comparatively low-tech home, where the only technological betrayal I have to be concerned with is having a dime dropped on me by an Amazon Echo.

Don’t say I didn’t warn you, Toyota. It’s not too late to save mankind.