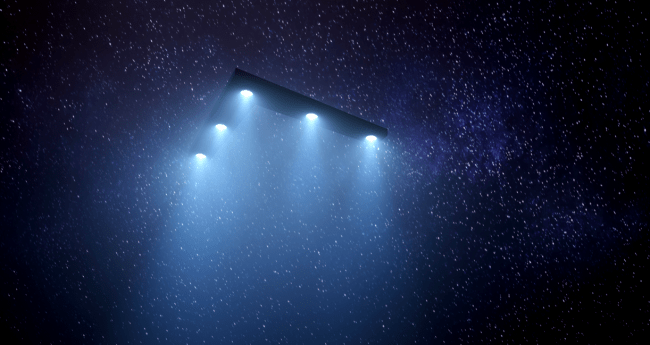 Triangle-shaped UFO sightings are so common, in fact, that a 2019 UFO sighting of one led one viewer to write, “This so far the best triangle craft video I have ever seen.”

Recently, a triangle-shaped UFO was spotted and filmed northeast of Chicago over Fox Lake in Illinois.

Unfortunately, as is often the case with videos such as these, it isn’t very long, nor very well filmed, and there was little to no follow-up video or investigation. The person who took the video claimed tremors from epilepsy is why the video is so shaky and short.

That being said, what were those three red lights in the night sky over Fox Lake?

Another triangle-shaped UFO was recently filmed over Indiana

Even more recently in nearby Indiana, another triangle-shaped UFO was spotted and filmed in Lake County by TikToker @alexandriarodrigu6.

This particular triangular UFO sported blue lights instead of red and the footage is marginally better than the video from Illinois.

Viewers had an assortment of reactions.

“I just saw this on the news online and thought OK, well I have multiple pictures as well of this, I live in Portage and my son saw it first,” one wrote.

“For years I have not told people what I’ve seen back in 1997 in Chicago IL south side,, now that more people are seeing the black triangle in the sky,” wrote another.

“Not a UFO. Not from Earth. there is intelligence behind these lights but who and what purpose they have is what you should ask,” someone else commented.

Someone commented that it could possibly just be spotlights, but the person who shared the video says it was not.

“Naw it wasn’t spot lights buddy we literally watched and have so much footage. In the first video you can’t see them just barely,” she wrote.

Another viewer wrote, “If those lights were a reflection as several have commented, why do they disappear behind trees? A reflection wouldn’t do that.”

So what was it? As usual, no one really knows.