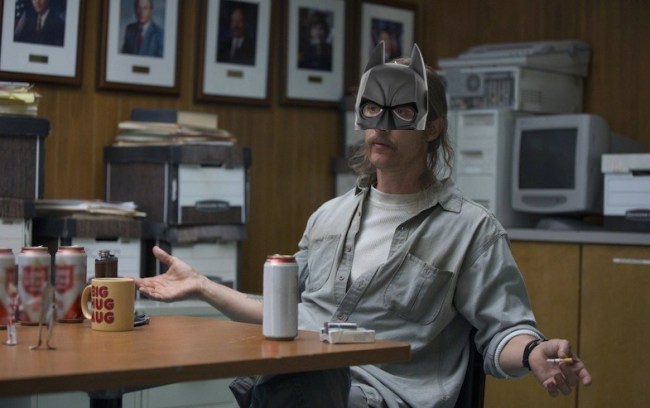 Buckle your seatbelts, folks, because this is what’s known around these parts as a scorching hot take.

I’m as big of a Batman guy as you’ll find on the internet but even this one is perhaps a step too far. The intersection of divinity and comic books is where I exit. And I’m not even remotely religious — the only times I’ve ever been in Church are for funerals — but something about Batman donning some holy-brass-Bat-knuckles to shoot the ones Jesus is just a step too far. Once The Big G (and/or J) gets involved, Pandora’s Box has been opened and there’s no going back. Just let him keep kicking Superman’s ass up-and-down the East Coast, it’s close enough.

Buuuuttttttt nevertheless, preposterousness aside, it’s a fascinating idea from True Detective creator Nic Pizzolatto that deserves sharing all the same.

Pizzolatto — figuring out a way to make the sharing of his thoughts more incomprehensible than the actual content of said thoughts — shared an Instagram slide show of screenshot direct messages explaining his ideas about The Dark Knight. To be fair to Pizzolatto, while I may agree in theory, I don’t necessarily agree in practice: just because I think I can kick my neighbor’s ass doesn’t mean I know on their door and let them know.

“Batman is not some wounded boy, some man-child who can’t get over his parents’ death. He’s not an arrested child. He’s not the Phantom of the Opera. He’s not broken in any way. He’s the opposite. Batman is not the story of a traumatized rich boy who works out his catharsis on the mentally ill. Batman is the story of how one human Saint turned a life-defining tragedy into the pinnacle of human achievement and the single greatest humanitarian crusade the world have ever known.”

So far, I’m on board, especially with the second paragraph, which represents a valid explanation of the character: many are quick to write him off as a “psycho with money” but that overlooks just how monumental his achievements are. Superman considers him to be the most dangerous man on the planet for a reason.

But here’s where things take an unnecessary left turn into spirituality:

Again, totally onboard for about 99% of the sentence, but then the literal last word changes the whole dynamic. I’m not even going to begin to delve into how or why Bruce Wayne would decide it’s time to wage war on the heavens.