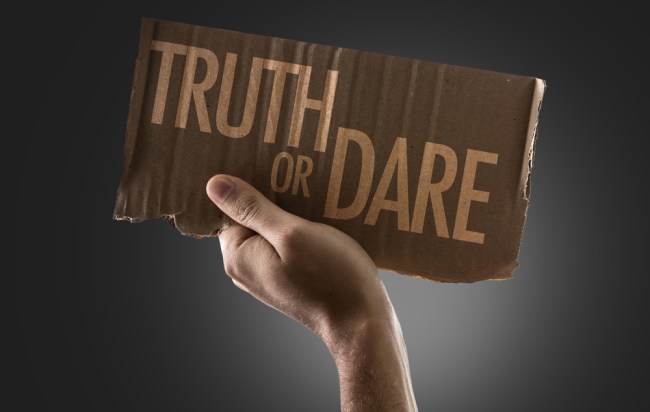 Truth or Dare. It’s a game everyone has played at some point or another. In adolescence, it was a way to sneak that first kiss with Becky with the good hair. Later on, Truth or Dare became a pretty glorious drinking game in college because the possibilities were endless. Over in an AskReddit thread, a bunch of people shared their biggest ‘Truth of Dare Gone Wrong Moment’s and I’ll be honest, I’m taking a lot of pleasure right now in laughing at other people’s hilarious misfortune. As always, you can add your own story down below in the comments if you’ve got something great to share.

billbapapa:
University – all drunk. Friend dared his girlfriend to make out with another chick. She did. Awesome. She likes it. They flirt / talk a lot during drinking. End of night comes, they go “home” (back to her dorm room) together. My friend / the boyfriend isn’t invited. Weeks later, girlfriend actually leaves him to be with the other girl.

TheStratStar:
Playing Truth or Dare Jenga. Pull the block saying “Kiss the person on your left.” I place a sweet gentle kiss on the girl to my left’s cheek. She blushes. Fast forward 11 years. I am single and she has half my shit.

ghost0427:
Myself included, the party was 3 guys and 3 girls. When the game started getting steamier and we had taken most of our clothes off, a guy asked one of the girls, and she chose dare.

“I dare you, to make out with me in the bedroom, along with [the other two girls]”

They went with him. The other guy and I spent the next hour playing Soul Calibur in our underwear.

djchuckles:
Middle school. Buddy was dared to go into closet and kiss this girl. Long time goes by so we check on them. He was so nervous he pissed himself and they were trying to clean up the mess with the clothes that were hanging up.

tFalk:
Girl picked Truth, her BF ask who was the best f*ck she ever had. She named his brother. She was drunk and told the truth, but he was super pissed. We got to watch the whole thing. Turns out it was before she was dating him, but he was still upset.

MyAnimalsBite:
Young, playing truth or dare with my friends outside at my house.

One friend dares me to piss in the bird bath which was in plain sight of where my parents and neighbors could see. I do it, he thinks its funny.

Next time it comes around to him he chooses dare. Other friend dares him to drink the water in the bird bath

That went wrong on him quick.

Maverick_OP:
One of the few times I was invited to a girl’s birthday party, with only two other guys and maybe seven girls, the girls all decided to play truth or dare/spin the bottle mash-up. It also began to dawn on me that the birthday girl had a crush on me and this was all a set up. I had no idea how to kiss and I pulled one of the guys that I was friends with aside and asked him to help me get out of this. He told me he’d help me out but I’d owe him big time. We went back in and sat down. After several truths and small dares from the other girls the birthday girl spun the bottle and it landed on me. She dared me to kiss her for five seconds. As we began to lean in a horrid smell hit all our nostrils. My friend set off a stink bomb in the trash can and forced us all to leave the room. We all laughed it off and I decided it was late enough to leave. The girl had to throw out the trash can but I got out of having my first kiss with a cute girl I had a crush on.

TL;DR: My friend set off a stink bomb because I didn’t want to kiss a girl.

Dan_christ:
Back in college we were pregaming at my friend’s apartment playing truth or dare Jenga. I pulled a brick that said to do a lap around the outside of the building naked. Easy enough, but it was the middle of winter so I slipped and fell on some ice and ended up breaking my ankle.

tdasnowman:
Got dared to run around the block naked, it wasn’t NYE’s but might have been close. I’m running I took the half block option because well I’m chubby fuck and therefore less running. So I do the main street portion of the run few honks all is well. The back stretch runs along a park on one side church on the other. There’s a guy running from the park and at first I think awww, poor little white guy running from the big black naked guy what a fucked up evening for him. Then I glanced over at the church and see fire in the windows and realize ohh he’s running from the fire he started and give chase. My friends waiting outside our apartment complex with a robe and a shot she random stranger run by, then me in full on naked chase mode yelling call the cops and the fire department. So that I gained a bit on that guy, but like a block down I realized we just called the cops and the fire department the fire department is an alley away from us and I’m naked black guy running through the neighborhood I need some clothes. Turn back and make it to my friends and a robe just in time for the cops to roll up, Fire department showed came over a few minutes later. Fire was an xmas tree in the park, my drunk ass saw the reflection in the church windows. Cops had also got a call about streakers but didn’t mention it till they left.

Post-Malonecore:
On NYE,a dude had to duel a hot girl in twerking.

SilverEyepatch:
Had to do a body shot off a random girl. Ended up slipping and headbutting her in the chest…

mrsheikh 813 points 4 hours ago
Back in college, bunch of us got together and played. Much liquor was involved. One guy dared the other fart in the face of another. Well, it is not easy to fart on command, so the guy is there trying to fart. Well, after much pushing and stomach squeezing, he said “OK, going to fart!” Bent over, pointed his ass as the other guys face…and sharted all over his face and head. Like not a log, but a freaking sprinkler of shit.

Pipster27:
Friend’s living room. 9pm. 40min in. everybody drunk or half drunk.
I started the fire by daring a girl to go topless and dance.
10min later Shit got real and cant exactly remember what was the exact dare or who invented it but like 2 seconds after dare was starting my friend’s mom opened the door just in time to see 2 topless dudes, 1 topless girl, 1 empty bottle of vodka, just opened bottle of wine and one girl about to lick another girl’s ass.

Sentinel-Prime:
Early high school, got dared to kiss the girl next to me. She recoiled in embarrassment/fear so I lost the dare.

Jokes on her, 12 years later we met in a bar and now we’re in a relationship.

Well, bros, that wraps up the coverage from my end but if you want to keep on reading these AskReddit stories you can CLICK HERE to see that thread in full! As always, you can drop your story/ideas/thoughts in the comment section down below.