Vaping Man Climbs Freeway Sign In L.A. Before Backflipping To The Ground, Shutting Down Highway During Rush Hour 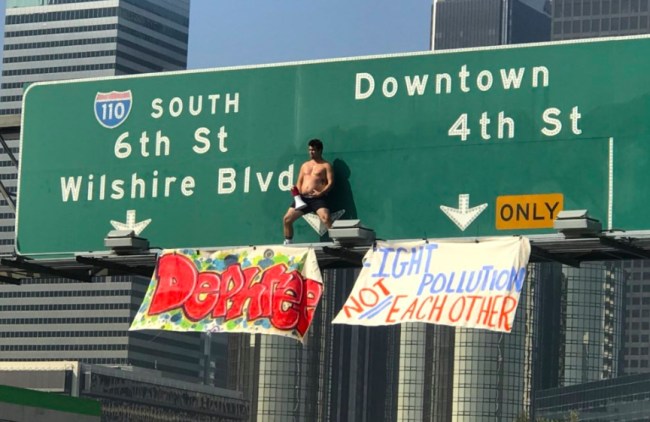 A man’s insatiable urge to go viral came at the expense of thousands of commuters in Los Angeles, who were forced to sit in park on the southbound lanes of the 110 Freeway for two hours during rush hour while authorities dealt with the stunt.

A shirtless man wearing boxers scaled an exit sign on Route 101 at around 8 AM, and unfurled a few political banners in between incessantly hitting his vape. The man, who has been identified as 29-year-old aspiring rapper Alexander Dunn (stage name Dephree), hung banners that said “Fight pollution not each other,” “My name is Dephree and I love God” and “Give a hoot, don’t pollute.”

He just said: “My name is Dephree and I love God.” pic.twitter.com/UXnMLjRkNE

According to the Los Angeles Times, witnesses claim that “the man was alternating between yelling about himself, love and God, and freestyle rapping. He also took breaks and would sit down and vape.”

Los Angeles firefighters placed two giant inflatable mattresses beneath the freeway sign and extended fire ladders from the sign in an attempt to remove Dunn, but he took this as an opportunity to taunt authorities.

Around 10 am, authorities convinced the man to end his stunt, in theatrical fashion–the dude backflipped onto the inflatable mattress before police placed him on a gurney in a seated position and removed him from the scene.

Dephree has just done a backflip of the sign. pic.twitter.com/d5qh6qybQ6

Dunn’s producer told The Times that they planned to release the images in a music video Wednesday evening. But, as former L.A. County Dist. Atty. Steve Cooley reports, if the stunt was done for commercial gain, Dunn could be hit with a hefty penalty.

“If you can establish that the act caused damages, then you seek to get that money back from the perpetrator.”

Those charges could be tacked on to the current ones: suspicion of delaying a police officer, trespassing on state property and failure to obey a regulatory sign.

I realize I’m part of the problem bringing this dude any exposure, but I never claimed to be a man with any integrity.